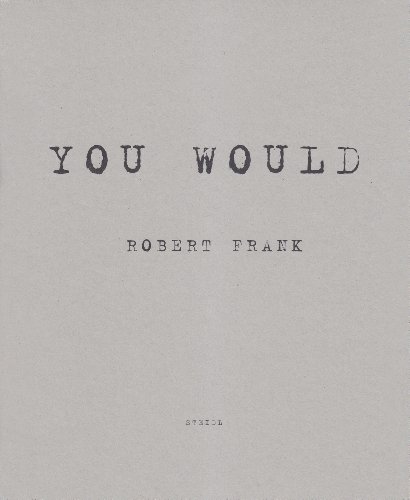 You Would
by Robert Frank
Publisher's Description
“Now I like it here OK, something you don’t like that can be the case anywhere. Of course I have to work a lot and that is how it is. But here all people tell you in a polite way what isn’t right.” Robert Frank

You Would is a sequel to Robert Frank’s acclaimed Tal Uf Tal Ab of 2010. You Would contains recent images, some shot on 35mm, others Polaroids, of Frank’s friends, acquaintances and surroundings in New York and Mabou, Nova Scotia. In the book are also iconic images from earlier in Frank’s career such as a photo of Delphine Seyrig and Larry Rivers on the set of Frank’s 1959 film Pull My Daisy. This careful edit of new and old suggests that past experience tempers Frank’s present, and shows that his life is not only recorded by book-making but shaped by it.
ISBN: 3869304189
Publisher: Steidl
Paperback : 48 pages
Language: English
Dimensions: 8 x 9.8 x 0.4 inches