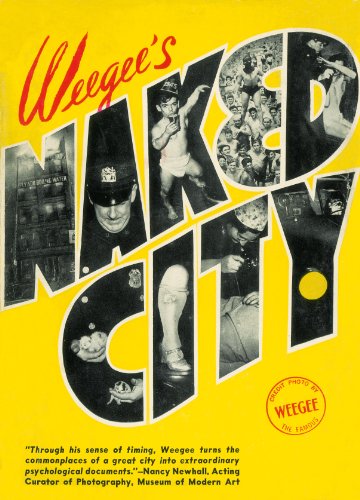 Naked City
by Weegee
Publisher's Description
When Naked City was published in 1945, it was an instant success and inspired a Hollywood film. Naked City is Weegee’s unflinching look at his beloved New York City through photos by turns ironic, hilarious, seamy and brutal. Photographing the city at all hours and in all its guises, Weegee created a thrilling, lonely and candid portrait, and a style that was to inspire younger photographers, not least Diane Arbus. Steidl’s facsimile of Naked City carefully recreates the original book, bringing to life an object that is in form and spirit as close as possible to the first edition, and of which Weegee would be proud.
Amazon.com Review
"If it bleeds, it leads" -- the cynical battle cry of today's tabloids -- might easily have been the motto of Arthur Fellig, the freelance photojournalist better known as Weegee, who cruised the streets of 1940s New York in the wee hours of the morning in search of the sensational. His pictures of children sleeping on fire escapes, blood-splattered corpses on sidewalks and amorous couples on the beach -- as seen in this reprint of his first book -- reveal that Weegee, unlike his latter day counterparts, had heart and soul. He also had a cockeyed sense of humor, as evidenced by his captions and camera tips.
ISBN: 3869304383
Publisher: Steidl
Hardcover : 244 pages
Language: English
Dimensions: 0 x 0 x 0 inches