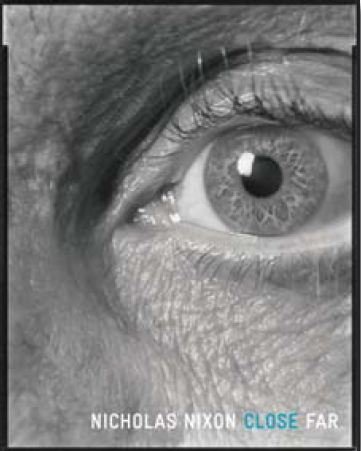 Close Far
by Nicholas Nixon
Publisher's Description
Nicholas Nixon is known for the ease and intimacy of his large format photography. He has photographed porch life in the rural South, the changing Boston cityscape, sick and dying people, the intimacy of couples, and an ongoing annual portrait of his wife Bebe and her three sisters, beginning in 1975. Included in the seminal 1975 exhibition “New Topographics”, Nixon is major figure in American photography of the latter half of the twentieth century.

In Close Far, Nixon presents a dichotomous group of photos made with his signature large-format view camera, in this case one with an 11x14 inch negative. The first half of the book contains self-portraits, comprising in Nixon’s words “sketches of an old man”. Filled with anxiety, longing and contentedness, these images chronicle the shapes, slopes and pores of Nixon’s face. The second half of the book shows views of buildings in the densest part of Boston. Made from high within the buildings and with the same camera, these images without horizons do not gaze down upon but rather “through” the city. With the lens in the same orientation as his self-portrait photos, Nixon’s results are remarkable for their richness of detail and complexity of form.
ISBN: 3869305363
Publisher: Steidl
Hardcover : 102 pages
Language: English
Dimensions: 0 x 0 x 0 inches