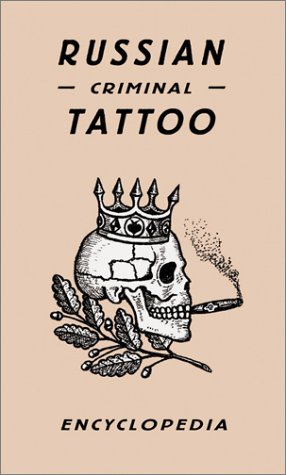 Russian Criminal Tattoo Encyclopaedia
by Danzig Baldaev
Publisher's Description
Once upon a time, before the advent of the indie rocker and the alternative chick, before primitivism became a style trend and tattoo parlors set up shop on the good avenues, tattoos were the secret language of a restricted world, a world of criminals.

The photographs, drawings and texts published here are part of a collection of 3,600 tattoos accumulated over a lifetime by prison attendant Danzig Baldayev. Tattoos were his entrance into a secret world, a world in which he acted as an ethnographer, recording the rituals of a closed society. The icons and tribal languages he documented are artful, distasteful, sexually explicit and sometimes just simply strange, reflecting as they do the lives and mores of convicts. Skulls, swastikas, harems of naked women, a smiling Al Capone, assorted demons, medieval knights in armor, daggers sheathed in blood, benign images of Christ, mosques and minarets, sweet-faced mothers and their babies, armies of tanks, and a horned Lenin-these are the signs with which this hidden world of people mark and identify themselves.
ISBN: 3882439203
Publisher: Steidl
Hardcover : 400 pages
Language: English