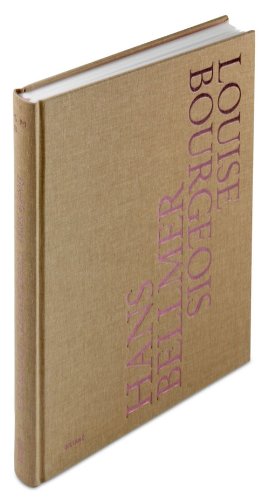 Hans Bellmer/ Louise Bourgeois: Double Sexus (Distanz)
by Henry Miller
Publisher's Description
Bodies distort, breaking down. Forms of male and female genitals fuse with one another. Male bodies become fetishes, with missing members; others are doubled and androgynous bodies result. The sexually charged works of Louise Bourgeois and Hans Bellmer reveal remarkable parallels, even though the artists have never actually met. Louise Bourgeois (b. 1911) lived in Paris until 1938, where she studied art, then went to New York, where her career as an artist began. There she maintained loose contacts to several of the Surrealists living in exile. Hans Bellmer (1902 1975) moved from Berlin to Paris in 1938, where he joined the Surrealists and regularly exhibited with them. Louise Bourgeois, a feminist by conviction, exposes in her works the conventional understanding of sexual identity. She skeptically examines the traditional image of women and in the process also reflects on the Surrealist view of women. She adapted various Surrealist methods such as fragmentation and metamorphoses for her own purposes. Hans Bellmer created in his puppet, an ideal woman in which all his desires and fantasies but also his secret, repressed fears are reflected. He took its limbs apart and reassembled the body. The puppet can be woman and man at the same time. This ambiguity of the sexes is continued seamlessly in Bellmer s drawings. This publication establishes for the first time a dialogue between the works of Hans Bellmer and Louise Bourgeois, which are marked by the views of a male and female artist, respectively, as well as by personal obsessions and desires. The publication continues the dialogue of the sexes on two other levels; it makes sense that a male and a female art historian should stake out the two positions art historically. On the other hand, the fact that Catherine Millet author of The Sexual Life of Catherine M. (2001): the most explicit book about sex ever written by a woman (Edmund White) and Michel Houellebecq author of Elementary Particles (1998) and The Possibility of an Island (2005) are juxtaposed on a literary level, will no doubt cause a sensation and promises titillating reading pleasure. The book is aptly outfitted in a mauve velvet cover with generous gold leaf.
ISBN: 3899554035
Publisher: Distanz
Hardcover : 160 pages
Language: English
Dimensions: 8.1 x 10.6 x 0.8 inches