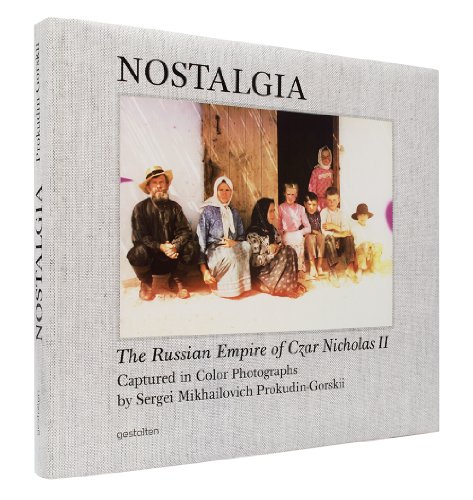 Nostalgia: The Russian Empire of Czar Nicholas II Captured in Colored Photographs by Sergei Mikhailovich Prokudin-Gorskii
by Sergei Mikhailovich <br>Prokudin-Gorskii
Publisher's Description
In 1909, Russian chemist and photographer Sergei Mikhailovich Prokudin-Gorskii (1863–1944) set out on a journey to capture all of Russia in color on behalf of Czar Nicholas II. One of the early pioneers of color photography, Prokudin-Gorskii systematically documented the vast empire with the unprecedented technique he had developed—a method in which he used color-sensitive glass plates—decades before the widespread availability of color film. His color images were not only meant to document the diverse citizens, ethnicities, settlements, folklore, and landscapes of a vast empire, but to create nothing less than a common identity for its populace.

Prokudin-Gorskii’s know-how and his skilled eye make his images especially vibrant and timeless. A century later, they have not lost any of their original beauty and intensity.

Over 250 of these early masterpieces of color photography, which have recently been laboriously restored by the Library of Congress, will be also showcased in the exhibition “Nostalgia”, and shown in Europe for the first time at Gestalten Space. The exhibition is part of the official selection of Berlin displays during the 5th European Month of Photography Festival from October 19th to November 25th, 2012.
ISBN: 3899554396
Publisher: Gestalten
Hardcover : 320 pages
Language: English
Dimensions: 11.8 x 10.7 x 1.3 inches