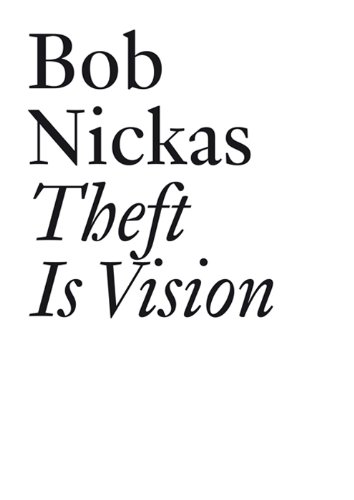 Theft Is Vision (Documents (JRP/Ringier))
by Bob Nickas
Publisher's Description
Theft is Vision gathers essays and interviews from the past ten years by the influential New York critic and curator Bob Nickas, offering a personal, shoot-from-the-hip take on the American art scene. More of a fan than a theorist, Nickas views art through a focused, subcultural lens; he pursues overlooked figures such as graphic designers Art Chantry and Jamie Reid, post-punk legends The Fall, cult artists Cady Noland and Steven Parrino; collaborates on photo/text pieces with Trisha Donnelly and John Miller; and offers a fictional conversation between Andy Warhol and On Kawara. Interviews with Philip Taaffe and Jeff Wall reflect on the 80s, while those with Wolfgang Tillmans (not previously published) and Kelley Walker bring us into the present. Since 1985, Nickas has organized over 60 exhibitions for galleries and museums as an independent curator. As Curatorial Advisor at P.S. 1 from 2003-2007, he organized more than 20 exhibitions, including Stephen Shore: American Surfaces, Wolfgang Tillmans: Freedom From The Known, William Gedney-Christopher Wool: Into the Night, Peter Hujar and the Lee Lozano retrospective, Drawn From Life. Nickas's book, Live Free or Die: Collected Writings 1985-1999 was published by Les Presses du réel in 2000, and Collection Diary, an account of his year-long project to 'play' at being a collector, was published by JRP|Ringier in 2004.
ISBN: 3905770369
Publisher: JRP|Ringier
Paperback : 160 pages
Language: English
Dimensions: 5.9 x 8.2 x 1 inches