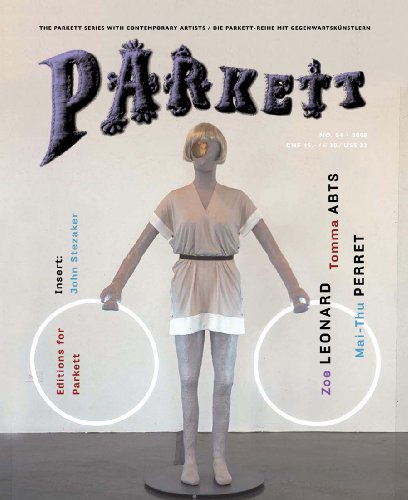 Parkett No. 84: Zoe Leonard, Tomma Abts, Mai-Thu Perret
by Bice Curiger
Publisher's Description
In this issue of Parkett, Jan Verwoert describes Tomma Abt's abstractions as 'defined by a kind of retroactive temporal logic: the movement that leads to the finished picture is a movement that keeps flowing back on itself in the process of overpainting.' Julien Fronsacq calls Mai-Thu Perret's work 'a product of a different persona' and suggests that it revolves 'around the structure of the novel.' According to Johanna Burton, Zoe Leonard uses the predominantly male photographic lineage to 'speak in tongues,' and to play with expectations-even as she expresses the metaphysical loneliness inherent to the medium: 'There is no such thing as a truly entwined gaze,' writes Burton, 'only ever the promise of one and the deep breach that results from its impossibility.' Also: Philipp Kaiser on Richard Hawkins, Josef Strau on Ei Arakawa, Charles Bernstein on art criticism, texts by Philip Ursprung and Jens Hoffmann, insert by John Stezaker and spine by Paulina Olowska.
ISBN: 3907582446
Publisher: Parkett
Paperback : 300 pages
Language: English
Dimensions: 8.2 x 9.7 x 0.8 inches