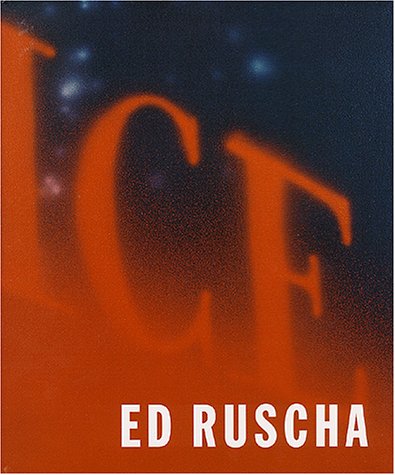 Ice
by Neal Benezra
Publisher's Description
One of the most consistently inventive artists of recent times, Los Angeles-based Ed Ruscha has been a pioneer in the use of language and imagery drawn from the popular media. From his early powerful word paintings to his influential artist books of the sixties and seventies to his recent colorful views of generic mountains, Ruscha has investigated the spaces between highways and journeys, images and words, abstraction and representation, public imagery and the contemporary landscape. In this publication, which accompanies a major retrospective exhibition organized by the Hirshhorn Museum and Sculpture Garden in Washington, D.C. and the Museum of Modern Art, Oxford, Neal Benezra, Kerry Brougher, and Phyllis Rosenzweig focus on all aspects of Ruscha's career, revealing him not merely as an artist closely linked with Los Angeles, but as an important international figure in contemporary art.

Ed Ruscha was born on the 16 December, 1937 in Omaha, Nebraska, but he grew up in Oklahoma City. In 1956, he moved to Los Angeles. Working occasionally as a graphic designer, Ruscha began to focus on fine art and began using words in his paintings, an interest that has continued to the present. In the sixties and seventies, Ruscha produced a series of books that have deeply influenced many artists since. Texts by Neal Benezra, Kerry Brougher, Phyllis Rosenzweig
Amazon.com Review
Hollywood, gas stations, and the airbrushed style of commercial graphics figure predominantly in Ed Ruscha's art. One of the first artists to use text and pop imagery in his paintings, he captured the America of Route 66 and the Sunset Strip. Not tied down to painting, he produced books of photographs that catalog life with a dry, deadpan humor, including Thirtyfour Parking Lots, Nine Swimming Pools, and Some Los Angeles Apartments. Ruscha began his artistic endeavors with plans to become a commercial artist. With his 1956 arrival in Los Angeles and its art community, he was fast on his way to becoming a major creative force with a uniquely American perspective.

The publication of Ed Ruscha coincides with the first traveling retrospective of Ruscha's work in nearly 20 years. Launched at the Hirshhorn Museum in Washington, D.C., the show covers his illustrious career from the 1960s through the present. If you can't make it to any of the show's other stops--Chicago, Fort Worth, Miami, or Oxford, England--then this book is a must-have. Included are three essays that elaborate on Ruscha's paintings, use of language, and photography in the context of art history by drawing parallels to earlier American painters and the history of documentary photography. Ruscha defies categorization by straddling both pop and conceptual art with his funny, elegant, and thoughtful work. --J.P. Cohen