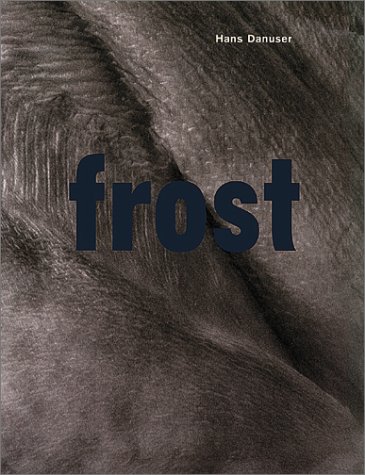 The various environments of modern science-genetic engineering, atomic energy, pathology, and animal testing-are the subjects of Hans Danuser's austerely beautiful black-and-white photographs. His images depict in clinical detail the research labs and factories, inaccessible to most of us, where new energies, knowledge, and power are generated. Recent series included in Frost continue to pursue his signature motifs, but push a step further toward abstraction, to the point where the photograph becomes an almost pure image. In Frozen Embryo, Danuser reveals the microscopic details of frozen embryos, intricate structures and surfaces that, once deciphered, might yield the secret of human life. Strangled Body captures partial small fragments of murder victims-skin as a fragile, movingly delicate membrane, precarious and precious at the same time. In Erosion, Danuser celebrates the terrifying beauty of eroded soil.The accompanying in-depth essay examines the evolution of Danuser's imagery from his minimal and claustrophobic observations of nuclear and pharmaceutical laboratories to the increasingly abstract and dense visions of his recent series, and emphasizes his salient amalgamation of intellectual and aesthetic concerns to create images that highlight some of the most pressing issues of today. Here is an artist who shows alarmingly vulnerable surfaces and the traces of human or natural powers inscribed on them-sublime indexes of life and death whose emotional impact is heightened by their abstract beauty.

Urs Stahel, born in 1953, is the director of the Winterthur Fotomuseum and the editor of a number of publications on photography. He lives in Zurich.

Swiss photographer Hans Danuser was born in 1953. His work is represented in various international collections, including the photography collection of The Metropolitan Museum of Art, New York. Danuser lives and works in Switzerland, Britain, and Germany.