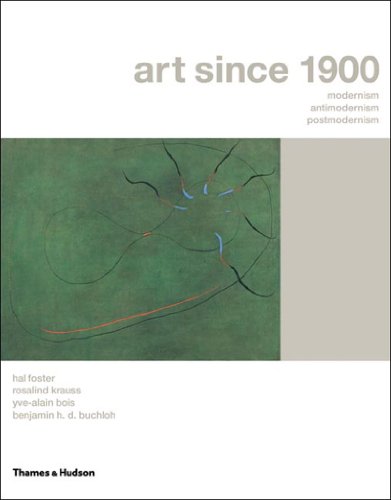 Art Since 1900: Modernism, Antimodernism, Postmodernism
by Hal Foster
Publisher's Description
In this groundbreaking and original work of scholarship, four of the most influential and provocative art historians of our time have come together to provide a comprehensive history of art in the twentieth century, an age when artists in the United States, Europe, and elsewhere sought to overturn the traditions of the past and expectations of the present in order to invent new practices and forms. Adopting a unique year-by-year approach, Foster, Krauss, Bois, and Buchloh present more than 100 short essays, each focusing on a crucial event-the creation of a seminal work, the publication of an artistic manifesto, the opening of a major exhibition-to tell the story of the dazzling diversity of practice and interpretation that characterizes the art of the period. All the turning points and break-throughs of modernism and postmodernism are explored in depth, as are the frequent and sustained antimodernist reactions that proposed alternative visions of art and the world. Illustrating the authors' texts are more than 600 of the most important works of the century, many reproduced in full color. The book's flexible structure and extensive cross-referencing allow readers to follow any one of the many narratives that unfold, whether that be the history of a medium such as photography or painting, the development of art in a particular country, the influence of a movement such as surrealism or feminism, or the emergence of a stylistic or conceptual category like abstraction or minimalism. Boxes give further background information on the important figures and issues. In their insightful introductions, the four authors explain the different methods of art history at work in the book, providing the reader with the conceptual tools for further study. Two roundtable discussions-one at mid-century, the other at the close of the book-consider the questions raised by the preceding decades and look ahead to the art of the future. A glossary of terms and concepts completes this extraordinary volume.
Amazon.com Review
Here's an exceptional rarity: a large, sweeping art history text book so well-done it almost makes the reader wish she or he were back in school. It's rather amazing that it took so long for a book like Art Since 1900: Modernism, Antimodernism, and Postmodernism to exist: a balanced, seven hundred page historical tome written with multiple perspectives in mind. As any undergrad knows, H.W. Janson's ubiquitous History of Art was written as if art history were some sort of race to colonize ideas and imagery; you'll likely not miss Janson's fetish for pointing out who did what first. Penned by a nimble crew who all teach at Ivy League universities, Art Since 1900, which mirrors the development of psychoanalysis and the creation of a huge international art scene, is on a smaller scale a history of contemporary theory and the art world almost as much as it is the art itself. Attention is paid throughout to important exhibits and texts, pointing out the rippling effect throughout the art community of these mirrors and portals. The book is arranged so that there are one or two essays per year. In such a novel format, often undervalued movements are given as much respect as Cubism and Minimalism. There are entire chapters here on Fluxus, feminist art, the Assemblage movement, Lettrism, the Independent Group, Gutai, Kineticism, the Harlem Renaissance, Aktionism, earthworks, video art, and the aesthetics of ACT UP. As with any history, there are personalities whose works are emphasized over that of others; the scant attention given to Jean-Michel Basquiat, for instance, is a rather large question mark. Quibbles aside, it's a very important, and nearly immaculate, work. --Mike McGonigal