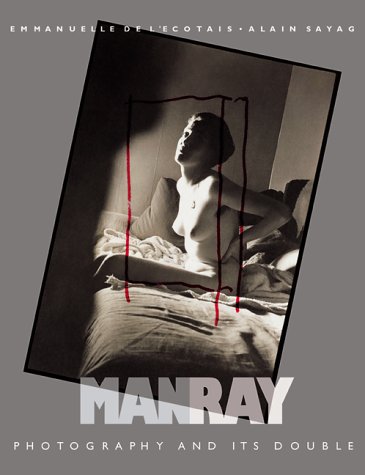 Man Ray: Photography and Its Double
by Alain Sayag
Publisher's Description
Man Ray (1890-1976), was one of the co-founders of New York Dada. When he arrived in Paris in the 1920s he was already friends with Duchamp and many Parisian Surrealists, who welcomed him with great enthusiasm. He is unquestionably recognized as the most original photographer of our century.

With his photographs, Rayographs, solarizations, and various experimentation with Surrealist doctrines in the darkroom, his photographic contribution to art and especially surrealism is matchless. Thanks to his famous portraits of contemporaries - artists, writers and celebrities - he also became the most notable chronicler of the inter-national Avant-garde movement of the 1920s and 1930s.

One-third of these photographs have never been seen.

Not only the finished photos, but also the process - crops, background manipulation and other methods. The book with its new images presents for the very first time a true picture of the artist, and a vital addition to the many publications about Man Ray that appeared throughout this century, many of which are long out of print. This monograph is a must for Man Ray experts, for those interested in photography, and a wonderful introduction to students and others not yet sufficiently familiar with Man Ray's work.