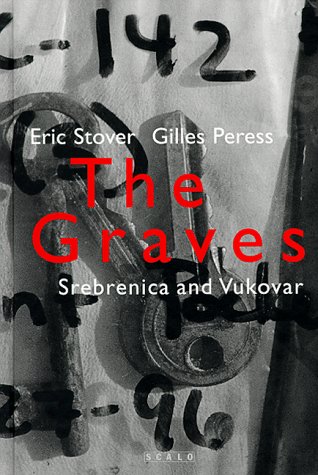 The Graves: Srebrenica And Vukovar
by Gilles Peress
Amazon.com Review
On the morning of July 16, 1995, after storming the Bosnian town of Srebrenica, Serbian militiamen massacred hundreds of Muslim civilians. They buried their victims in a mass grave in a wheat field on the outskirts of town, after having been congratulated by their general, Ratko Mladic, who told them, "Finally, the time has come to take revenge on the Turks."

Mladic and his soldiers went about orchestrating other atrocities, but the dead of Srebrenica came back to accuse them through the work of an American-led team of forensic anthropologists who reconstructed erased lives from scraps of bone and cloth. Eric Stover's well-written account of the scientists' work in the killing fields of Bosnia, accompanied by photographs by journalist Gilles Peress, makes for disturbing but hopeful reading---hopeful because, through such documentation, the perpetrators may eventually be brought to justice. --Gregory McNamee