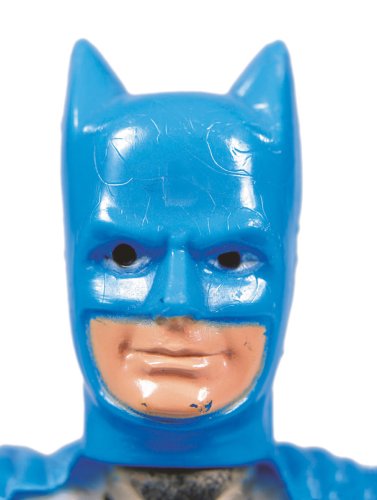 Toygiants
by Selim Varol
Publisher's Description
Daniel and Geo Fuchs were, until recently, best known for their stark photographs of animals, fish and humans conserved in science museums, which address the mortality of their subjects. More recently, they've shifted from dark documentary to these glowing Technicolor images of action figures, retaining many of the same concerns and taking up questions about the power of mass media and the cult of personality. Their first crop of new subjects were Batman, Superman and the Incredible Hulk. They soon moved on to Bruce Willis, Sylvester Stallone and Uma Thurman. And when they got to Saddam Hussein, Osama bin Laden and George Bush, the borders between reality and fiction really started to wobble. Commonalities between the networked world of entertainment and 'war games' became unavoidable. The iconographic strategies of a president climbing out of a fighter plane equipped with military gear are scrutinized in a George W. Bush doll in its original packaging, with military accessories. How different the somber, plastic faces of Bruce Willis and Sylvester Stallone, Cold War-era soldiers without much left to do at the box office. These miniature sculptures-the title toys-turn out to be the ideal subjects for the Fuchs' intensely observed portrait photography, which asks but does not answer: outside the toy box, outside the frame, what is real and what is staged? Toygiants leaves the interpretation of its pale, vacant, plastic faces to the viewer.
ISBN: 3939738190
Publisher: Verlag Fur Moderne Kunst Nurnberg
Hardcover : 214 pages
Language: English
Dimensions: 9.8 x 12.3 x 0.9 inches