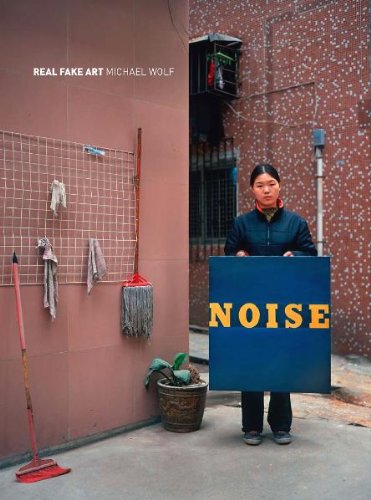 Michael Wolf: Real Fake Art
by Michael Wolf
Publisher's Description
Strange, this is how these pictures appear at first sight. In front of typical Chinese urban backdrops young Chinese men and women present oil paintings by American and European artists from different epochs. Rembrandt, Van Gogh, Andy Warhol, Ed Ruscha, even photographs by Lee Friedlander, William Eggleston, Bernd and Hilla Becher or August Sander can be found among the works. What stands behind all this?

In fact we see pictures of a multi-million dollar industry – the production of copies of popular artworks, which are sold at giveaway prices into the whole world. Van Gogh: $ 75, Andy Warhol: $ 45, Ed Ruscha $ 50. The handpainted copies mainly come from China, the buyers can almost entirely be found in the United States and Europe, the countries of origin of the unaffordable originals.

Michael Wolf has photographed the Chinese copy-artists in a fantastic way and in his pictures he has placed manifold relations between the picture subject, the urban environment and the portrayed artists, that reach far beyond the superficial humor. The list of questions, which arise, is long:

- Did Rubens and Rembrandt paint their works all by themselves?
- Aren’t the copies produced, in order to palm them on collectors?
- What’s the value of an original in the age of technical reproducibility?
- Who buys these copies?
- Why do the Chinese provide this market?
- What does this mean for other industries?

Boris von Brauchitsch discusses these and other questions in his comprehensive essay, which accompanies the series of images.