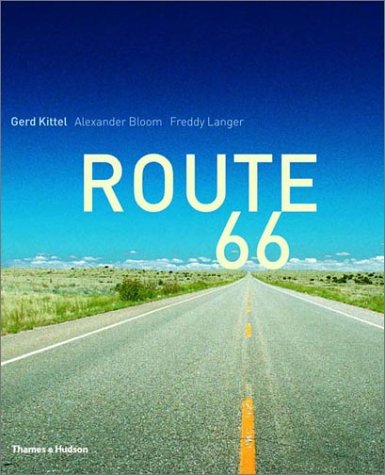 Route 66
by Gerd Kittel
Publisher's Description
ROUTE 66
PHOTOGRAPHS BY GERD KITTEL
TEXTS BY ALEXANDER BLOOM AND FREDDY LANGER
The road that became known as Route 66 holds a unique place in American popular culture. Unlike any other road in world history, this modest two-lane highway has taken on cult status, bound up with American nostalgia for a past in which life was far less complex and mechanized than it has become at the turn of the twenty-first century. Inaugurated by a group of businessmen in the 1920s, at a time when the automobile was rapidly becoming the main preference for family vacation travel, Route 66's lifespan was short-less than fifty years-but its mythology lives on. Before the advent of interstate superhighways, Route 66 was the main road to the American West, where, it was believed, opportunity and success were waiting. While Alexander Bloom and Freddy Langer relate the curious history of Route 66 in detail, it is Gerd Kittel's extraordi- nary photographs that tell the story of the road as it is now. Wistful, brutal, and beautiful at the same time, they show what has become of a once powerful symbol of American hopes and pleasures: the wrecks of abandoned automobiles, the deserted diners and souvenir shops, the battered remnants of silos and warehouses, derelict towns, surviving personalities and buildings, as well as some of the views the road offers as it passes through eight states between Chicago and the Pacific Ocean. Anyone who has ever been aware of Route 66-if only from the hit song by Bobby Troup or the television series of the 1960s- will find much to treasure in Gerd Kittel's moving photographs.

Gerd Kittel is a German photographer whose previous books include Southwest USA, A New England Autumn, and Diners. Alexander Bloom is Professor of History and American Studies at Wheaton College and the author of Prodigal Sons, 'Takin' It to the Streets', and Long Time Gone. Freddy Langer is the photo and travel editor of the Frankfurter Allgemeine Zeitung.
ISBN: 0500283508
Publisher: Thames & Hudson
Paperback : 176 pages
Language: English