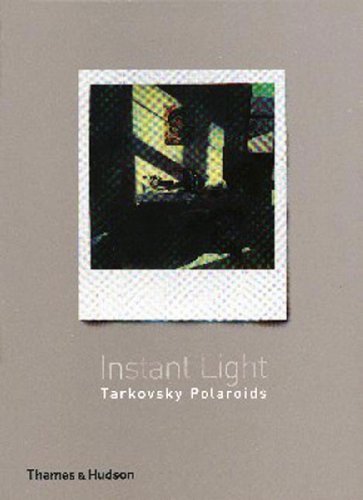 Instant Light: Tarkovsky Polaroids
by Giovanni Chiaramonte
Publisher's Description
Tarkovsky often reflected on the way that time flies and this is precisely what he wanted: to stop it, even with these quick Polaroid shots … These images leave us with a mysterious and poetic sensation, the melancholy of seeing things for the last time. It is as though Andrey wanted a swift way to pass his own enjoyment to others. They are something to be shared, not only a method of making his own wish to stop time come true. And they feel like a fond farewell’ – Tonino Guerra, from the Introduction

Composed of sixty luminous polaroids taken by Andrey Tarkovsky in Russia and Italy between 1979 and 1984, this beautifully produced series of cameos from the director’s life reveals him to be a master of the still as much as of the moving image. The photos in the first section, taken in Russia, have the radiant melancholy of lengthening shadows and trees looming through misty dawns near Tarkovsky’s country dacha, together with portraits of his wife, son and dog, loaded with nostalgia by quotations from his later diaries. Those taken in Italy portray exquisite still lifes and glimmering ruins. The book concludes with photographs from Tarkovsky’s personal collection.

Tarkovsky is here revealed as realizing the utmost potential of a fleeting, disposable medium: his images seem to capture eternity in a moment. Probably best-known for his 1972 film Solaris, and widely considered the finest film-maker Russia has ever produced, Tarkovsky died in 1986 in Paris.
ISBN: 0500286140
Publisher: Thames & Hudson
Paperback : 136 pages
Language: English
Dimensions: 0.5 x 8.4 x 6.1 inches