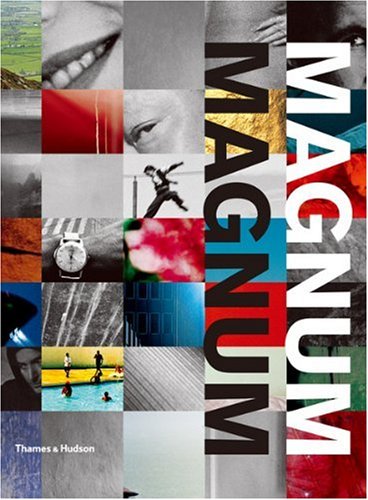 Magnum Magnum
by Brigitte Lardinois
Publisher's Description
Since its founding in 1947 by Robert Capa, Henri Cartier-Bresson, George Rodger, and David 'Chim' Seymour, Magnum Photos, the legendary co-operative, has powerfully chronicled the peoples, cultures, events, and issues of the time.

Magnum Magnum brings together the best work, celebrating the vision, imagination, and brilliance of Magnum photographers, both the acknowledged greats of photography in the twentieth century—among them Henri Cartier-Bresson, Robert Capa, Eve Arnold, Marc Riboud, and Werner Bischof—and the modern masters and rising stars of our time, such as Martin Parr, Susan Meiselas, Alec Soth, and Donovan Wylie. And it shows the work at a breathtaking scale: the vast page size of Magnum Magnum—12¾ by 15¾—gives the photos an impact never seen before in book form.

Organized by photographer, the book harks back to the agency's early days and the spirit that made it such a unique and creative environment, one in which each of the four founding members picture-edited the others' photographs. Here a current Magnum photographer selects and critiques six key works by each of the sixty-nine featured photographers, with a commentary explaining the rationale behind the choice.

This groundbreaking publication is at once a permanent record of iconic images from the last sixty years and an insight, as seen through the critical eyes and minds of Magnum photographers, into what makes a memorable photograph. This first edition of Magnum Magnum will become one of the greatcollectibles—an essential book for anyone interested in photography or the world depicted by it. 400+ photographs in color and duotone.
ISBN: 0500288305
Publisher: Thames & Hudson
Paperback : 568 pages
Language: English
Dimensions: 8.5 x 10.2 x 1.7 inches