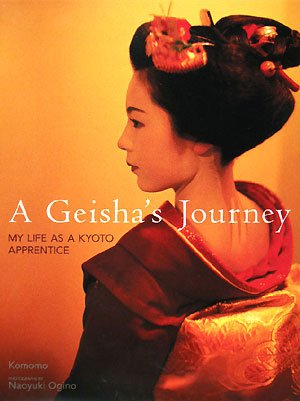 A Geisha's Journey: My Life As a Kyoto Apprentice
by Naoyuki Ogino
Publisher's Description
This is the story of a contemporary Japanese teenager who, in a search for an identity, became fascinated with the world of geiko-as Kyoto's geisha are known-and discovered in herself the will and the commitment to overcome the many years of apprenticeship necessary to become one.

It is a story related by a young Japanese photographer who grew up overseas, and who also was captivated by the lives led by these women who choose to dedicate their lives to their art. He began following and documenting the life of the teenager, Komomo, as she studied and grew into her role.

His photographs follow the entire narrative of her journey, from her first tentative visits after finding the geiko house on the Internet, through her commitment as an apprentice and the hard schedule of learning arts that go back centuries. He continued shooting all the way to the ceremony of her officially becoming one of the rare breed of geiko-and beyond. From the cobbled streets where she walks in her elaborate dress to the inner sanctums of her dressing room, he has captured a very rare look at a very unique, living art.

The photographs are accompanied by autobiographical text and captions by Komomo, as she shares her thoughts and emotions, and describes the life of a Kyoto apprentice. It is an illuminating view of seven years in the life of a very unique young woman.
Amazon.com Review
Review
"A Geisha's Journey is a captivating story of both will and serendipity, told through the lens of Naoyuki Ogino and the narrative of Komomo, a young girl determined to become a geiko." --The International Herald Tribune


Product Description
This is the story of a contemporary Japanese teenager who, in a search for an identity, became fascinated with the world of geisha, and discovered in herself the will and the commitment to embark on the many years of apprenticeship necessary to become one. It is also the story of a young Japanese photographer who grew up overseas, and who also was captivated by the traditional lives of these women who choose to dedicate themselves to their art.


The photographs are accompanied by autobiographical text and captions by Komomo, as she shares her thoughts and emotions, and describes the day-to-day existence of a Kyoto apprentice. It is an illuminating view of seven years in the life of a very special young woman.

A Look Inside A Geisha's Journey


Komomo, a contemporary geisha from Kyoto, Japan, undergoes the elaborate makeup application that completes her transformation.

Naoyuki Oginos's photography documents the transformation of the fifteen-year-old school girl, Ruriko, into the adult geisha, Komomo. His images provide a behind-the-scenes look at Komomo's apprenticeship, tracing her journey from her tentative arrival at the geisha house to the ceremony in which she officially became a geiko, as Kyoto's geisha are known. From the cobbled streets where Komomo walks in her elaborate kimono (in bottom left photo) to the inner sanctum of her dressing room, A Geisha's Journey offers a rare look at the contemporary practice of a traditional art. 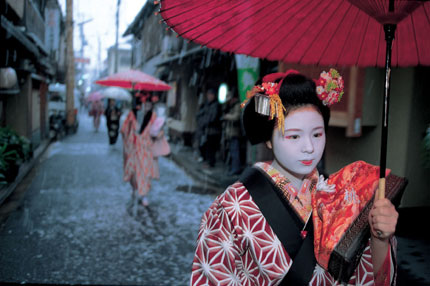 Q: How are geisha viewed in modern day Japan? Is this different from what you understand the perception to be in the Western world?

Ogino: In general, people find geisha unattainable and they really would like to see them if they could have the chance. I also think there are fewer preconceived notions toward geisha in Japan than in the west.

Q: Many Americans have formed their opinions about the geisha world based on the book and film, Memoirs of A Geisha. How do people in the geisha profession feel about the book and the film? Are there any misconceptions that you would like to clarify?

Ogino: I consider the book absolute fiction, not a documentary. It’s a pity that the story describes extremes with a lack of humanness. I often hear complaints about the film from people who are not involved in hanamachi, saying that the kimono styles, make-up, and hairstyles look far from reality. It is true that the book and the movie got attention for the geisha world, but unfortunately the film increased the gap between the real world of Geisha and people’s understanding of them.

Q: What do contemporary Japanese men think of geisha? What about Japanese women?

Ogino: Japanese men think geisha are mysterious. And also they adore geisha to some degree. On the other hand, young Japanese women especially adore geisha. A lot of Japanese men think they want to have a chance to have a party at ozashiki (banquet parties hosted by full geishas) even just once. And a lot of women think they want to have a chance to dress up as a geisha and take pictures. It is not unusual for mother and daughter to take these pictures together.

Q: How have you changed throughout the apprenticeship and this project?

Ogino: I started to rethink the significance of life. I realized I tended to value inorganic things, such as money, through my Japanese education and society. I have seen the importance of culture beyond the perception of tourism. Throughout the photo shoot for the book, my life became more enriched.


Q: Has this experience affected your relationships with women outside the geisha world?

Ogino: My point of view has changed not only for women but for all people. I feel more strongly that people establish themselves based on their environment, culture, and surroundings as well as their sense of values and education. Through my work with Komomo, I’ve been noticing how people accumulate experiences and change their personality. This experience brought me a spiritual sustenance for my life beyond reading a book or attending a class. As for the change in how I see a woman, I realized you can’t describe the source of a woman’s beauty without thinking about her heart and culture.


Q: Are geisha practices different now than they were in the past?

Ogino: There is no difference in terms of highly esteemed hospitality but I see differences in surface appearance. For example, people can now become apprentices after graduating compulsory education—or junior high school. In the past, there were apprentices who weren’t even 10 years old yet. At the time, they had more time to practice to become a geisha. There used to be a crest on the bottom part of the kimono belt, which was designed as a guide to help a young apprentice easily find her geisha house if she were to get lost. Now, there is no longer a purpose for the crest. Hanamachi coexists with its customers. As Japanese manufacturing style has changed and as industries which were based on thread diminished, the culture of hanamachi lost people who understand its history and traditions. Nowadays, after the bubble burst in Japan, a lot of smaller companies went bankrupt so the number of customers of hanamachi has decreased. But the strengths of tradition exist in adaptability, not in the conservative mind. For example, as far as job recruiting through the internet, Japan is the most successful country in the world. I guess the change of the recruiting system could be the most notable change in hanamachi.


Q: What was your perception of geisha before you began to work on this project versus the reality of what you saw day-to-day?

Ogino: My perception about geisha has changed since I began working on this project. I once thought geisha were mysterious, cute and beautiful women who wear a kimono everyday. Now, I’ve come to understand that their existence is a miracle in that their long history has survived until now. Before working on this project, I only noticed the beauty, novelty and freshness of the geisha. Now, my fascination with Japanese culture continues to grow deeper.