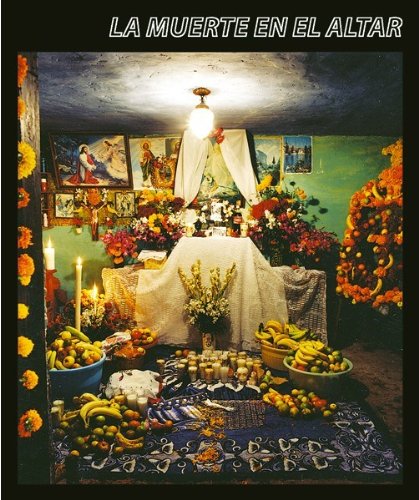 Tomas Casademunt: Death on the Altar
by Tomas Casademunt
Publisher's Description
There is the Day of the Dead that tourists see, and there is the Day of the Dead that is a lived ritual and a fact of life in Mexico-and it is the latter that the Spanish photojournalist Tomás Casademunt sets out to document in Death on the Altar. Casademunt's approach to this often misunderstood subject focuses on the altars that families assemble to remember and mourn the dead (rather than addressing any activity that attends them), and consequently his images are as humble and generous as the gestures they depict. Many of the shots of these domestic altars are frontal views, for Casademunt never attempts the spectacular shot, nor does he labor to insert himself into the tale. Like an ethnologist, he records a testimony without adding pictorial layers of sentiment or undue piety, so that what we get are intimate, ordinary atmospheres in which the sense of lived ritual is palpable and approachable and into which the viewer's intrusion is minimal. After seven years of explorations in villages in the states of Morelos, Michoacán, Oaxaca, Yucatán, Tlaxcala, Puebla and Guerrero, Tomás Casademunt has produced a group of photographs of great beauty and scale.