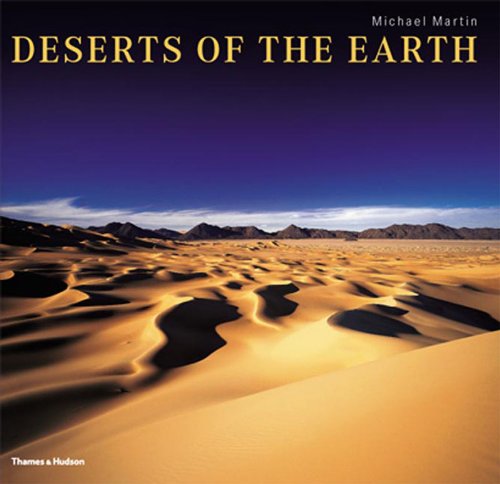 Deserts of the Earth
by Michael Martin
Publisher's Description
Internationally renowned photographer Michael Martin has traveled through every desert on earth, crossing Asia, Australia, the Americas, and Africa, seeking out the most spectacular landscapes, from the Rub al-Khali to the Great Sandy Desert, the Great Basin, and the Kalahari. Many of these 'wastelands' consist of more than just desert sand. Afghanistan's Bamian region is notable for its deep blue-green lakes set in a rocky landscape. The Danakil's unnamed volcanoes glow in the Ethiopian night, while Chile's Atacama region harbors geysers that can erupt at any moment. Martin was joined on his five-year motorcycle odyssey by camerawoman Elke Wallner, who has documented the major deserts of the world in a television series. Together they overcame numerous obstacles-political and physical-to accomplish a journey of some 60,000 miles and the first single-volume documentation of earth's breathtaking desert landscapes.
Amazon.com Review
Born in Munich in 1963, photographer Michael Martin must surely have been a nomad in another life, as he's become the world's photographer of the African deserts. Over the years, he's published 15 books and taken at least 80 journeys throughout the world's deserts, in often dangerous conditions. This book, five years in the making, is sort of a culmination of his work to date, and it's lovely. Thankfully, Martin's as interested in the inhabitants of these far-flung and strangely shifting lands as he is in the stark beauty of the environments themselves. None of the commentary is hackneyed or written with postcolonial prejudices; on the contrary, it's quite clear the long-haired and adventurous Martin wishes he could be living in the desert himself. If you think this is going to be all a bunch of pictures of sand in various formations, you are sorely mistaken. Here are breathtaking images of mineral-encrusted salt lakes, strange craggy rocks, beautiful cacti, and people with weather-beaten faces who live in trailer homes, tents and medieval towns. --Mike McGonigal
ISBN: 0500511942
Publisher: Thames & Hudson
Hardcover : 371 pages
Language: English
Dimensions: 11.8 x 11.8 x 1.5 inches