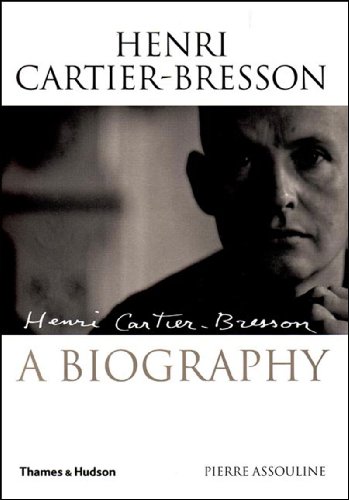 Henri Cartier-Bresson: The Biography
by Pierre Assouline
Publisher's Description
The twentieth century was the century of the image—and Henri Cartier-Bresson (1908–2004) was the eye of the century. Through the decades, this eye focused on Africa in the 1920s, the tragic fate of the Spanish Republicans, and the victory of the Chinese Communists. It was Cartier- Bresson who fixed in our minds the features of his contemporaries: Giacometti and Sartre as characters from their own works; Mauriac mysteriously levitating; Faulkner, Matisse, Camus, and countless others captured at the decisive moment for eternity.

An intensely private individual, Cartier-Bresson confided in his close friend Pierre Assouline over a number of years, even opening up his archives to him. Here, for the first time, we read about his youthful devotion to surrealism; his unending passion for drawing; the war and the prison camps; the friends and the women in his life. Assouline provides an acute and perceptive account of the life and philosophy of this icon of our times, and gives us an opportunity to reassess his contribution to twentieth–century photography and reportage.