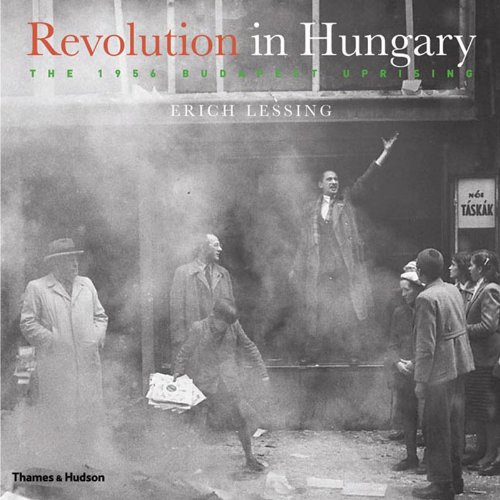 Revolution in Hungary: The 1956 Budapest Uprising
by Erich Lessing
Publisher's Description
On October 23, 1956, what began as a mass rally in Budapest quickly evolved into the Hungarian Revolution. Within days, millions of Hungarians were supporting the revolt. It lasted until November 4th when it was crushed by Hungarian Security Police and Soviet tanks and artillery. Between 25,000 and 50,000 Hungarian rebels and 7,000 Soviets were killed, thousands were injured, and nearly a quarter of a million people left the country as refugees.

Erich Lessing was the first photographer to arrive in Hungary, and he documented the short-lived uprising and its aftermath in a series of world-famous photographs, reproduced here in stunning duotone. They bring to life once more the hope and euphoria of the first days of the revolt, so soon to be followed by the pain and punishment of its brutal suppression.

A member of Magnum and the winner of numerous awards for his work, Erich Lessing lives in Vienna. His introduction to the book records his memories of those days in Budapest. Political journalist François Fejto writes about the political and historical background; novelist Gyorgy Konrad tells of his personal experiences during that period; and historian Nicolas Bauquet discusses the aftermath of the revolt and its repercussions in the Western world.
ISBN: 0500513260
Publisher: Thames & Hudson
Hardcover : 252 pages
Language: English
Dimensions: 11.9 x 11.9 x 1 inches