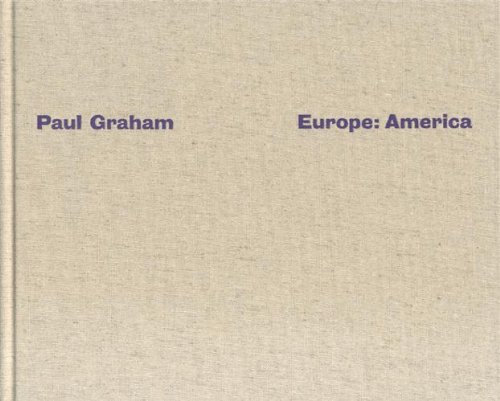 Paul Graham: Europe, America
by Paul Graham
Publisher's Description
Europe–America is not a Paul Graham retrospective, but rather a juxtaposition of two classic series from the British photographer’s career that encompass certain key themes permeating his oeuvre. Long out of print, New Europe (1986–1992) contrasted the optimism of an economically expanding Europe with the ongoing legacy of the continent’s major conflicts, from the dictatorships of Franco and Hitler to the Irish conflict, and with the banalities of consumerism. Today, as Europe falters in the worldwide economic downturn, New Europe makes the recent past seem ancient history. The second series is A Shimmer of Possibility (2004–2006) which recorded telling signs of class disparity in Bush-era America—from Boston to Pittsburgh to Texas—amid sublime moments of glory in chance detail. Loosely inspired by Chekov’s short stories, and hailed as “one of the most important advances in contemporary photographic practice that has taken place in a long while,” A Shimmer of Possibility became a celebrated photobook classic, its first edition selling out with extraordinary swiftness. In both series, Graham portrays social realities with a sense of historical scale that rises above both documentary and narrative traditions in photography. Combined, they offer a vision of the recent western past that is of great relevance to our cultural moment.
ISBN: 8415303343
Publisher: La Fabrica/Fundación Botín
Hardcover : 138 pages
Language: English
Dimensions: 11.7 x 9.5 x 0.6 inches