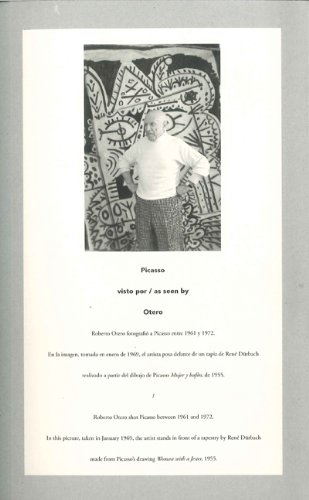 Picasso as Seen by Otero
by Roberto Otero
Publisher's Description
As a friend of the Picasso family, the Argentinean photographer, journalist, writer and documentary filmmaker Roberto Otero (1931–2004) had a unique opportunity to continuously document Pablo Picasso and his circle of friends during the last years of Picasso’s life, in the south of France. Otero first met the artist through the critic Ricardo Baeza, the writer Jose Bergamin and the Spanish poet Rafael Alberti, whose daughter Otero married. Over the course of nearly ten years, from 1961 to 1970, Otero made hundreds of portraits of Picasso, amassing a vast collection of photographs that was eventually acquired by Museo Picasso Malaga, in 2005. These photographs have become the most important documentation of the artist’s old age. Mostly unposed, informal and at ease, Otero’s color and black-and-white portraits show an uncharacteristically relaxed Picasso, working in the studio, reading or entertaining with his wife, Jaqueline.
ISBN: 8415303742
Publisher: La Fábrica/Museo Picasso Málaga
Paperback : 96 pages
Language: English
Dimensions: 6 x 9.5 x 0.3 inches