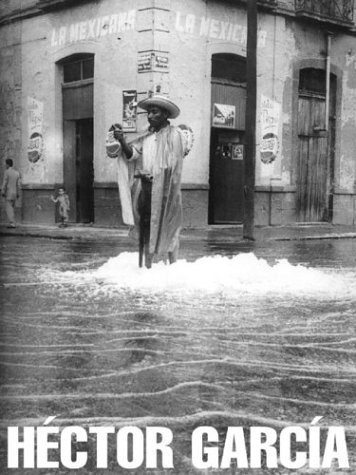 Hector Garcia
by Pablo Ortiz Monasterio
Publisher's Description
André Malraux once called Mexican photographer Héctor García the creator of 'one of the cruelest images of our time.' That picture was García's Niño en el Vientre de Concreto, a disorienting black-and-white picture of a disheveled, dirty child folded up into an insignificant crawl space cut in a plane of concrete. García grew up in Mexico City during a time when the country was struggling to define itself as a modern nation. His work as a photojournalist acquired great significance at the time because of his unwavering desire to express his ideology through images; unique among his colleagues, García managed to combine a feel for information with the distinctive zeitgeist of an age in which the identity of Mexican culture was a constant preoccupation among writers and artists, the greatest of whom García photographed, including David Alfaro Siqueiros, Dr. Atl, and Frida Kahlo. In a situation where corruption, hypocrisy, and lack of flexibility were day-to-day mechanisms of the government, García's ironic gaze opposed celebrations of power to events where social and labor conflicts raised by workers and students met with repression by the regime, particularly in 1958 and 1968. Death, religion, politics, and art were located as regions of identity by García's gaze, which was always careful of extracting allegories out of everyday facts, out of the reality that is evident to the eye, both in urban areas and in native communities. This publication features an introduction by Susan Kismaric, curator in the Department of Photography at The Museum of Modern Art, New York; and an anthology of texts that analyze and comment on the work of Héctor García. The photographic selection was made by Mexican curator Alfonso Morales and photographers Paulina Lavista and Pablo Ortiz Monasterio.
ISBN: 847506647X
Publisher: Turner
Hardcover : 208 pages
Language: English