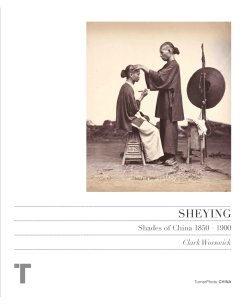 Sheying
by Clark Worswick
Publisher's Description
The Quing Dynasty, which spanned three centuries, from 1644 to 1911, was the last ruling dynasty of China. Before the collapse of the empire ended 2,000 years of Imperialism and ushered in a time of political and economic strife, artists and artisans turned out rich paintings, porcelain plates, vases and photographs— the last having arrived in the country in the 1840s. This publication presents a key selection of photographs of the Southern Chinese coast taken by both Chinese and European photographers. It touches on the cultural exchange between the Chinese and those Western photographers who began to explore the country, like Milton M.Miller, William Saunders and John Thomson. Miller, during a short period in the 1860s, set up a photo studio in Hong Kong and introduced portraiture in the formal Western style of the time to the Chinese upper-middle classes.
ISBN: 8475068049
Publisher: Turner
Hardcover : 172 pages
Language: English
Dimensions: 9.4 x 11.1 x 1 inches