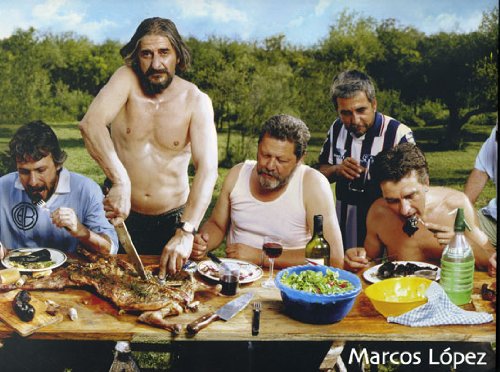 Sub-Realismo Criollo: Fotografias Color 1993-2003 (Recorridos Cruzados) (Spanish Edition)
by Marcos Lopez
Publisher's Description
In 1993, in a radical turnaround, Lopez discontinued the melancholic black and white portraits he had made up until that point, and introduced the color saturated, delirious iconography that has characterized his photography in the last ten years. Bitterness and insistent subversion lie just beneath the surface of Lopez' contrived scenes. As does a political commentary that taps into a tradition in Latin American art, as well as contemporary reaction to dictators, economic nightmares and political fiction. Valeria Gonzalez discusses the significant influence of Lopez' work and what has been called 'Pop Latino,' followed by 50 images. Includes a fold out of Lopez' own Last Supper-'Roast in Mendiolaza, Cordoba.'
ISBN: 8478007075
Publisher: Ediciones Universidad de Salamanca Ediciones
Paperback Language: Spanish