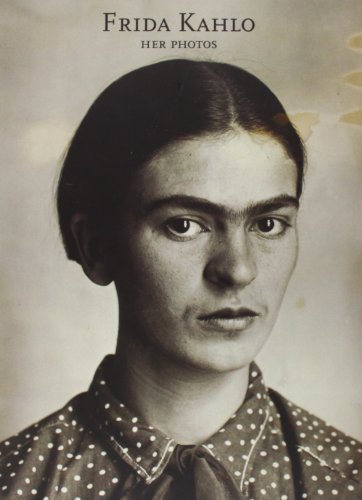 Frida Kahlo: Her Photos
by Pablo Ortiz Monasterio
Publisher's Description
When Frida Kahlo died in 1954, her husband Diego Rivera asked the poet Carlos Pellicer to turn her family home, the fabled Blue House, into a museum. Pellicer selected some paintings, drawings, photographs, books and ceramics,maintaining the space just as Kahlo and Rivera had arranged it to live and work in. The rest of the objects, clothing, documents, drawings and letters, as well as over 6,000 photographs collected by Kahlo over the course of her life,were put away in bathrooms that had been converted into storerooms. This incredible trove remained hidden for more than half a century, until, just a few years ago, these storerooms and wardrobes were opened up. Kahlo’s photograph collection was a major revelation among these finds, a testimony to the tastes and interests of the famous couple, not only through the images themselves but also through the telling annotations inscribed upon them. Photography had always been a part of Kahlo’s life—her father Guillermo Kahlo was one of the great Mexican photographers at the beginning of the twentieth century—and her collection constitutes a roll call of great photographers:Man Ray, Brassaï,Martin Munkacsi, Pierre Verger, George Hurrel, Tina Modotti, EdwardWeston,Manuel and Lola Álvarez Bravo, Gisèle Freund and many others, including Kahlo herself. It is likely that many of the unattributed photographs in the collection were taken by her, though we can only be sure of the few that she decided to sign in 1929. Frida Kahlo: Her Photos allows us to speculate about Kahlo’s and Rivera’s likes and dislikes, and to document their family origins; it supplies a thrilling and hugely significant addition to our knowledge of Kahlo’s life and work.
ISBN: 8492480750
Publisher: RM
Hardcover : 524 pages
Language: English
Dimensions: 6.9 x 9.5 x 1.5 inches