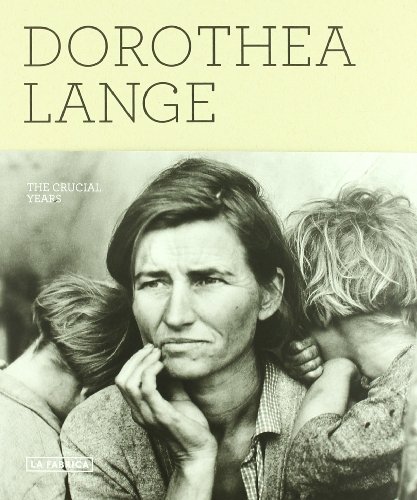 Dorothea Lange: The Crucial Years
by Dorothea Lange
Publisher's Description
In 1935, the photographer Dorothea Lange joined Franklin D. Roosevelt’s Farm Security Administration project, charged with the task of inventing an iconography that would record and convey the tales of Depression-era America. It was a task that forced Lange’s photography to evolve from its then portrait-based character, as she stepped out into the streets to document the woes of the Great Depression, thus creating what is today her most legendary body of work. Gathering powerful images of displaced farmers, sharecroppers and migrant workers (such as the classic “Migrant Mother”) with her Graflex camera, Lange put a human face to this difficult era, and revolutionized documentary photography. She obtained results without forcing them, instead just “sitting down on the ground with people, letting children look at your camera with their dirty, grimy little hands, and putting their fingers on the lens, and you just let them, because you know that if you will behave in a generous manner, you are apt to receive it.” The Decisive Years surveys the various topics that Lange approached throughout the 1930s and 1940s, with an important selection of her work for theWar Relocation Authority (on the evacuation and relocation of the American citizens of Japanese origin)—only a few of which have ever been reproduced in catalogues—and her documentations of farmers’ communities in California and Arizona, and the Conference of the United Nations in San Francisco.
ISBN: 8492498757
Publisher: La Fabrica
Hardcover : 186 pages
Language: English
Dimensions: 9.6 x 10.6 x 0 inches