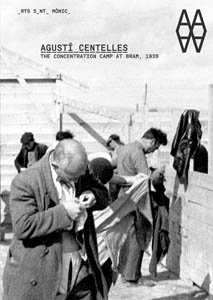 Agusti Centelles: The Concentration Camp at Bram, 1939
by Teresa Ferre
Publisher's Description
After the fall of Barcelona in the final months of the Spanish Civil War, the photojournalist Agustí Centelles was interned together with other refugees in the Bram concentration camp in France, where he remained a prisoner from 1 March to 13 September 1939.

After leaving Barcelona and during his stay and subsequent release from the Bram concentration camp, Centelles wrote a diary that has now been published. He also took about 600 documentary photographs of life in the camp, each possessing a stunning expressive force.

This is a unique and extraordinary testimony of life in a concentration camp in 20th-century Europe. The catalogue gives a selection of images made by Centelles in the Bram concentration camp in 1939, in addition to a series of extracts from his diary and documentation about the camp.
ISBN: 8492861088
Publisher: Centre Dart Santa Monica
Hardcover : 128 pages
Language: English
Dimensions: 0 x 0 x 0 inches