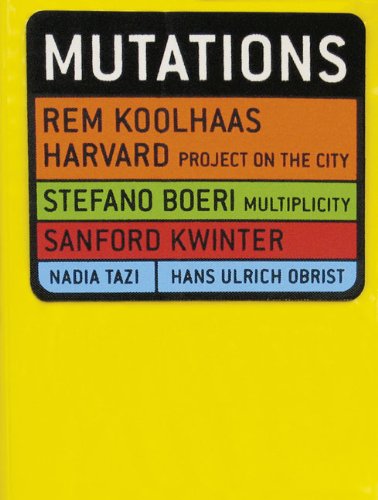 Mutations
by Hans-Ulrich Obrist
Publisher's Description
The acceleration of the phenomena of urbanisation constitutes one of the challenges of our time. In a world redefined today by communication networks and by a progressive erasure of borders lead by economic forces, MUTATIONS reflects on the transformations that the acceleration of these processes inflicts on our environment, and on the space left for architecture to operate. Introduced by charts and statistics on global urbanization and a series of essays describing the nature of the changes operating in our cities and in our economies, the book is organized as a hIghly illustrated atlas/survey of contemporary urban landscapes.
Amazon.com Review
"A city is a plane of tarmac with some red hot spots of intensity," Rem Koolhaas, the pathbreaking architect and author of such semiotically seminal books as Delirious New York and the more recent S, M, L, XL, remarked in 1969. More than 30 years later, there are more of those hot spots around the world than ever, and they're getting hotter every day. Globalization, standardization, and the high-speed innovations of our current information age are transforming urban centers from London to Los Angeles to Lagos, and more places are becoming more urban, and at a faster pace, than ever before.

Mutations is an eye-popping atlas-cum-analysis of this new urbanization, and much of it is composed of essays and meditations (from a variety of contributors) on the 21st-century international City (often un-)Beautiful. Most of them are written in language that will be familiar to readers of Koolhaas's past books: in other words, dense, abstract, and chock-full of references to Foucault, Deleuze, and Guattari. If you like that sort of deconstructivist yammering, great; if not, the major small-type essays are best sampled (or, better, skimmed) one at a time, interspersed with the many other more accessible elements of the book that truly do add up to a vivid and fascinating mosaic of postmodern urbanism.

From Koolhaas and Harvard Design School's Project on the City come two engrossing and wholly straightforward explorations: one of the Pearl River Delta, which China has designated as a zone of unrestricted capitalist experimentation, and whose five major urban centers have consequently exploded overnight in all sorts of instructive and often frightening ways; and another of the chaotic, congested and Blade Runneresque megalopolis of Lagos, Nigeria, whose patterns of growth, housing, and commerce defy all conventional wisdom on how cities should develop. There's also a bounty of excellent (and often astonishing) statistics on all aspects of urban growth; a "snapshots" section of phenomena from cities all over the globe; a completely spot-on (and unintentionally funny) analysis of the evolution of shopping as the last truly unifying urban public activity (and the subject of Koolhaas's next full-scale book); and a trenchant look at Kosovo as ground zero in the first major war of the Internet age. (It should be noted that there's a separate section on the U.S., which with all its soulless, tacky consumerist excess gets the drubbing it usually can expect from the European intelligentsia, although the irony here is that more and more of newly urban Europe is starting to look like newly urban America.)

The exhibit-quality photography throughout is great, and, as you could expect from this unofficial successor to S, M, L, XL, the design is satisfyingly outré, right down to its post-Warholian plastic yellow easy-wipe cover with glued-on mousepad. But for all of Mutations's rich trove of facts and insights, and the impression that its high-tech design gives of an ironic embrace of the new urbanization, its deeper tone is one of disappointment and loss. The spirit of Jane Jacobs resides here, with all its yearning for the quirky, quaint beauty of human-scaled townhouses and shops, sidewalks and byways, and for the precorporatized glamour of grand old towns like New York, London, Paris, and Shanghai, before such metallic nouveau hubs as Atlanta and Kuala Lumpur were ever on the world-commerce map. Mutations was written and compiled largely by architects, after all, who hate ugliness as much as the next guy, whatever they may claim otherwise; its precisely for that reason that this densely absorbing new compendium betrays its wistfulness as often as it promotes its own air of cool, ethnographic bemusement. --Timothy Murphy