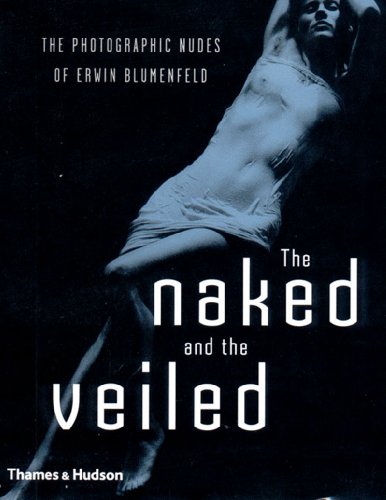 The Naked and the Veiled: The Photographic Nudes of Erwin Blumenfeld
by Erwin Blumenfeld
Publisher's Description
From the surreal to the classical, Erwin Blumenfeld was an imaginative sensualist whose photographs are becoming increasingly sought after. The images fully represent the variety of styles Blumenfeld employed
Amazon.com Review
Erwin Blumenfeld shot to fame in 1938 with the publication of 14 sensational nude photographs in Verve magazine. The commission led to a career as one of the most gifted and sought-after fashion photographers of the '40s and '50s. However, throughout his career Blumenfeld remained fascinated with the naked female form and its representation within photography. In The Naked and the Veiled: The Photographic Nudes of Erwin Blumenfeld, his son Yorick traces Erwin's fascination with the nude to his visit at the age of 9 to an artist's studio in Berlin. Surprised by the young boy's entrance, the naked model "quickly threw a diaphanous cloth over herself. But the outline of her body was still visible against the light." Inspired by this moment, Blumenfeld later claimed that women could become "even more naked by their transparent veils." A psychoanalyst would have a field day with this comment, as well as Blumenfeld's subsequently compulsive and fetishistic photographs of the naked female form, captured over 40 years spanning his early days in Holland in the 1920s to his later years in the USA in the 1960s.

The 120 illustrations in duotone and color crisply reproduce Blumenfeld's obsession, from early experiments in form inspired by surrealism (and Man Ray in particular) to later, more classical nudes, playing with images of transparency and opacity. The Naked and the Veiled is an extraordinary photographic diary of a self-confessed "erotomaniac." --Jerry Brotton, Amazon.co.uk