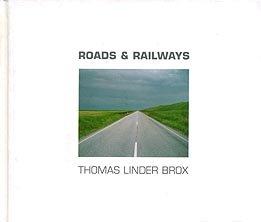 Roads & Railways
by Thomas Linder Brox
Publisher's Description
Thomas and Rasmus yearned for desolate places, which they were not finding in their homeland, Denmark and as a consequence of this, they travelled almost 6000 kilometers through Norway, Finland and Sweden. They went north by the E6 route, which took them through a landscape of widespread forests and barren mountain crests. These photographs are shot in 1999-2001, of which some are from the series ‘Patagonia, ‘Visions of India', and ‘Transit'. He has collected 21 photographs from 4 continents and 10 different countries, all of which relate to the same theme. Rasmus states in the epilogue: 'On one hand the roads and railways always give an indication of direction that gives rise to the hope that the purpose or meaning of the journey can be found behind the horizon. On the other hand the pictures show no final destination by the end of the road, no arrivals, only the open space and the constant repetition of the point from which the trail again disappears into the unknown.'
ISBN: 8789783964
Publisher: Space Poetry
Hardcover
Buy on Amazon