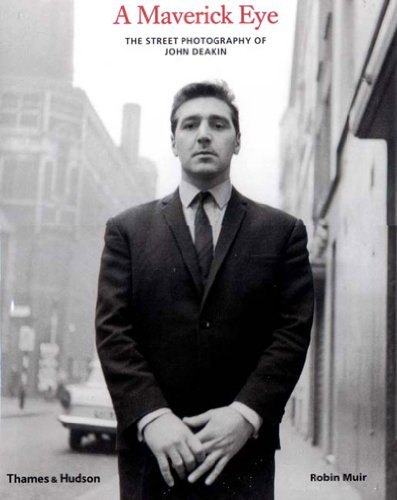 A Maverick Eye: The Street Photography of John Deakin
by Robin Muir
Publisher's Description
THE STREET PHOTOGRAPHY OF JOHN DEAKIN
The reputation of British photographer John Deakin rests chiefly on his remarkable documentary photographs and portraits of the creative souls and maverick talents who haunted the pubs and clubs of London's Soho in the 1950s. Francis Bacon, Lucian Freud, Frank Auerbach, Colin Maclnnes, DylanThomas ... these painters, poets, writers, and others defined an era in the cultural life of postwar England.

Less known are Deakin's haunting evocations of life on the streets of London, Paris, and Rome. Here his eye is not cold-blooded or dispassionate but rather profoundly generous, sympathetic to the chaos of postwar urban life. His pictures of lamplighters, fairground workers, dog walkers, priests, nuns, and shopkeepers reveal an empathy to rival that of Doisneau and Brassdi. Equally intriguing are his depictions of the relics of human activity: chalked-up children's games, graffitied messages of love or anger, and the richly textured shapes and surfaces of street signs, peeling walls, window shutters, and shop-front banners.

Though a legendary drinking companion in artistic cir- cles, Deakin was not universally popular the Woolworth heiress Barbara Hutton once described him as 'the second nastiest little man I have ever met.' Yet he was respected by all for his professionalism and his originality. After his death in 1972 his work lay neglected for a number of years. The Street Photography of John Deakin helps restore him to his proper place as one of the UK's finest photographers.

Robin Muir is a former picture editor of British Vogue and the Sunday Telegraph magazine. Among his other books are David Bailey: Chasing Rainbows.

'Many of those who, all unwittingly, were his sitters are crushed by life; and the artist quite without condescension or sentimentality sees the poignancy of their desperate will to live in a world that has quite defeated them.'
-Colin Maclnnes
ISBN: 0500542449
Publisher: Thames & Hudson
Hardcover : 208 pages
Language: English
Dimensions: 9.5 x 11.8 x 1 inches