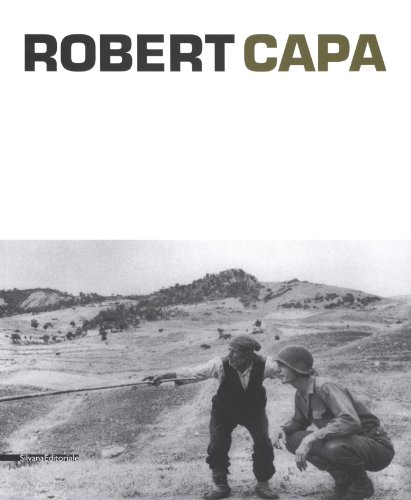 Robert Capa (English, French and Italian Edition)
by Virginie Ebongué
Publisher's Description
even in his lifetime, Robert Capa was described as the greatest war photographer in the world. It was an ironic achievement for a man who loathed war, but to this day, no one better embodies the photographer as cultural soldier and no one’s work better encapsulates the violence and brutality of the twentieth century than Capa. This volume presents a rich selection of his work as a war photographer, starting from the images that established his fame: his documentation of the horrors of the Spanish Civil War from 1936–1939 and the Chinese resistance to the Japanese invasion in 1938. It continues on to World War II—including Capa’s stunning photographs of the D-Day landing in Normandy, where on June 6, 1944, he swam to shore alongside the second assault wave of American troops—and on to the first Arab–Israel conflict in 1948, before concluding with the First Indochina War, in which Capa joined a French regiment and eventually lost his life. Today, the wars of the twentieth century may have transformed from wounds into scars, but Capa’s images remain as devastating as ever, describing the trauma of war through a civilian’s eyes, and reminding us that despite years of loss and destruction, humanity manages to persist.
ISBN: 8836622887
Publisher: Silvana Editoriale
Hardcover : 144 pages
Language: French
Dimensions: 9.5 x 11.3 x 0.7 inches