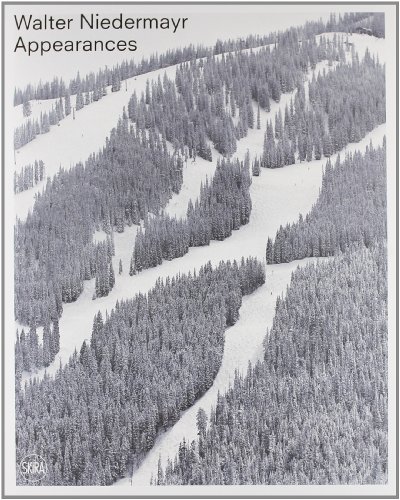 Walter Niedermayr Appearances
by Filippo Maggio
Publisher's Description
Through twenty-seven serial works and four video installations, this spectacular catalog presents the recent artwork of Walter Niedermayr, mostly realized between 2006 and 2009. This new important chapter of Niedermayr’s work on the exploration of Iran is his latest production within his wide research about mountain landscapes. Since the ‘80s Walter Niedermayr has been investigating the relationship between man and mountainous environments, including the changes brought about by the growing phenomenon of mass tourism and its effects, both in terms of human presence and infrastructure building. These works lead to questions about the perception of landscape and the effects of human action on natural settings.

In this series, Niedermayr brings into focus the 5,000-year-old cultural history expressed in the present. In his works, he investigates the Iranian landscape developed since the Islamic Revolution of 1979-strongly characterized by Western influence-and its relationship with the cultural sites and architecture of ancient Persia, pointing out connections between past and present.
ISBN: 885720975X
Publisher: Skira
Hardcover : 108 pages
Language: English
Dimensions: 11 x 11.5 x 0.6 inches