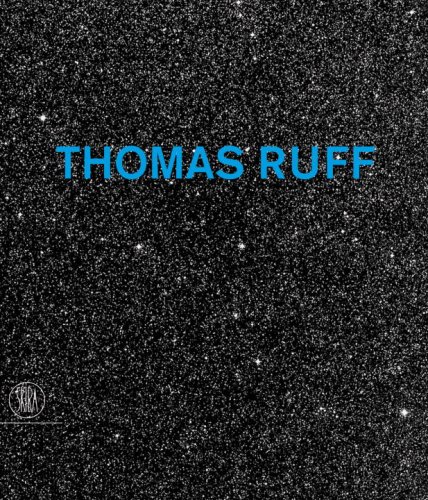 Thomas Ruff
by Carolyn Christov-Bakargiev
Publisher's Description
Thomas Ruff is one of the best-known and most influential German photographers working today. Ever since the early 1980s, he has investigated the photographic medium, the use that is made of it, and the world of contemporary visual culture in general. This volume brings together and comments upon a selection of over eighty-four photographic works on the most diverse subjects: house interiors, portraits, architecture, starry skies, and nocturnal urban views. Also included are the recent nudes taken from web sites and other images from the internet, paying particular attention to the artist’s most recent works and his relationship with the visual production of the digital era in general. The volume is also the catalogue for an exhibition (Castello di Rivoli, March 16–June 21, 2009) and it includes a number of previously unpublished essays by the curator Carolyn Christov-Bakargiev and Daniel Birnbaum, director of the Venice Biennial 2009, Visual Arts section. In addition to the works in the exhibition, it presents some of Ruff’s most important and widely discussed creations since the 1980s. The volume also contains a complete bibliography and an anthology of writings on the artist, some never previously published in English.
ISBN: 8861302971
Publisher: Skira
Hardcover : 312 pages
Language: English
Dimensions: 9.5 x 11.5 x 0 inches