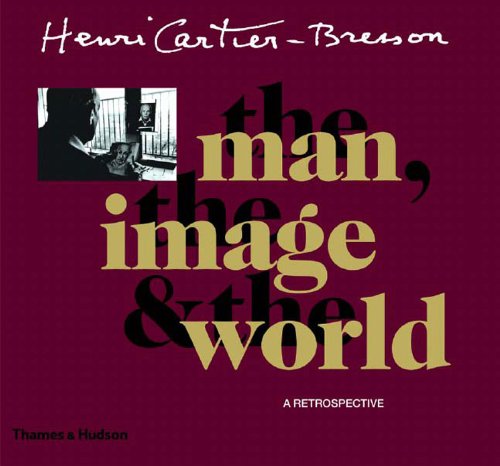 This sumptuous collection of work by Cartier-Bresson is the ultimate look at his achievements. The book brims with classic photographs that have become icons of the medium, as well as rarely seen work from all periods of Cartier-Bresson's life, including a number of previously unpublished photographs and a generous selection of drawings, paintings, and film stills. The book also features telling personal souvenirs of his youth, his family, and the founding of Magnum.

This definitive collection of a master photographer's work will be an essential book for anyone interested in photography—indeed, for anyone interested in the people, places, and events of the past century. Paperback edition has additional illustrations.
Amazon.com Review
Henri Cartier-Bresson spent four decades traveling the world as a photojournalist in search of what he called "the decisive moment"--the instant when visual harmony and human significance coalesce. Published in honor of his 95th birthday, Henri Cartier-Bresson: The Man, The Image & The World is a handsome volume that reproduces more than 600 photographs, film stills, and drawings and includes essays by art, photography, and film experts. Trained as a painter in his native France, Cartier-Bresson began his photography career during a trip to the Ivory Coast in 1931. After shooting his way through Europe, Mexico and the U.S., he became an assistant to filmmaker Jean Renoir and directed documentaries in support of the Spanish Civil War. Imprisoned by the Germans during World War II, he escaped to document the liberation of Paris. More than a quarter-century of magazine photography followed—-including vivid glimpses of modern life in India, China and the Soviet Union—-before he put aside his camera in favor of his sketchbook. Cartier-Bresson's ability to capture peak moments resulted in unforgettable single photographs, like that of a woman in a group of former concentration camp prisoners who suddenly recognizes her Gestapo informer and reaches out to hit her. His constant watchfulness led to images that capture fleeting emotion—-lust, pride, despair, expectation, glee—-on the faces of people going about their daily lives in grim cities, sleepy villages, and vast landscapes. Shaped by compassion and a self-effacing absence of personal judgment, these photographs reflect a worldview no longer fashionable but forever relevant to human understanding. —Cathy Curtis
ISBN: 0500542678
Publisher: Thames & Hudson
Hardcover : 432 pages
Language: English