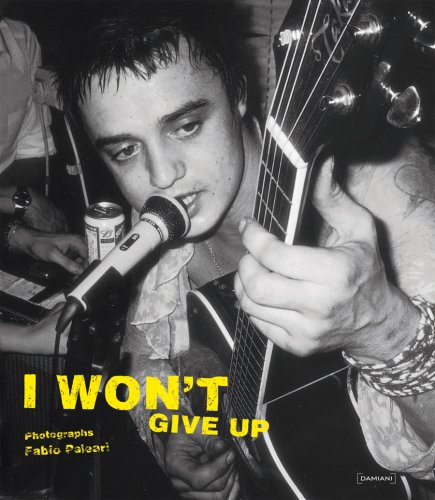 Fabio Paleari: I Won't Give Up
by Fabio Paleari
Publisher's Description
Any follower of the international tabloids is well-acquainted with rocker Pete Doherty, the former Libertines frontman who is now quite famous for his on-again, off-again love affairs with supermodel Kate Moss and crack cocaine. After getting kicked out of the influential aforementioned British post-punk band for his over-the-top drug use, Doherty started the band Babyshambles in 2005. Despite his frequent stints in rehab and a jail sentence for burglarizing a bandmate’s apartment, Babyshambles has put out two records, Down In Albion (2005) and Shotter’s Nation (2007). Though fringe elements of Doherty’s incendiary story have been well documented by unauthorized paparazzi, the authorized, inside view has never been available until now. In I Won’t Give Up, Italian photographer and documentary filmmaker Fabio Paleari, known for capturing one of the last interviews with Allen Ginsburg before his death in 1997, follows Doherty onstage, backstage, while partying from 2004–2006 and throughout the vicissitudes of his relationship with Moss. Over the course of his 30-year career, Paleari has created his own fair share of gossip with photographs of all kinds of illicit activity and glamorized sex, drugs and rock ‘n’ roll. Here, above all, he captures the “off”moments, when Doherty is at his roughest and least inhibited. This unique photo portrait closes just months after the famous video of Kate Moss’ cocaine relapse aired to the public in 2007. Also available in a limited edition, which comes boxed with a photograph on baritate paper signed by Fabio Paleari.
ISBN: 8862080190
Publisher: Damiani
Paperback : 272 pages
Language: English
Dimensions: 9.2 x 10.7 x 0.8 inches