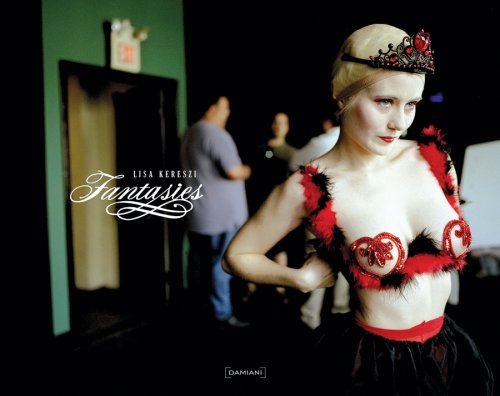 Lisa Kereszi: Fantasies
by Lisa Kereszi
Publisher's Description
When Rudolph Giuliani's administration cracked down on Times Square strip clubs in the 1990s, a whole new burlesque movement was born in New York, concentrating less on the strip and more on the tease. The young New York photographer Lisa Kereszli, then an assistant to Nan Goldin, was there with her camera to catch it all happening. She began by shooting Show World, a club that was in the process of being closed down by the new laws. In her flash, Kereszi caught abandoned lockers, dressing rooms filled with old shoes and costumes and the grimy elegance of the empty theater-which was never meant to be seen by the light of day. Simultaneously, she began to photograph the new burlesque scene-which went underground in the late 1990s and has since evolved into a conceptually sophisticated, funny and rebellious medium. More pinup than porn, in just a few years, the new burlesque is no longer invisible, and has been gleefully appropriated into mainstream culture by way of Hollywood and the print media. A graduate of Yale University's MFA program, Kereszi's editorial work has appeared in books and magazines, including The New York Times Magazine, Nest, Harper's, Wallpaper and GQ; she is represented by Yancey Richardson Gallery in New York.
ISBN: 8862080298
Publisher: Damiani
Hardcover : 96 pages
Language: English
Dimensions: 9.2 x 11.5 x 0.6 inches