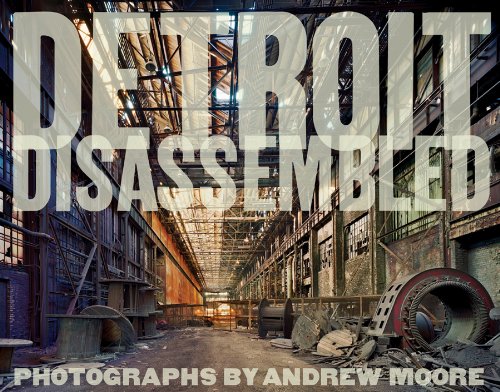 Andrew Moore: Detroit Disassembled
by Andrew Moore
Publisher's Description
No longer the Motor City of boom-time industry, the city of Detroit has fallen into an incredible state of dilapidation since the decline of the American auto industry after the Second World War. Today, whole sections of the city resemble a war zone, its once-spectacular architectural grandeur reduced to vacant ruins. In Detroit Disassembled, photographer Andrew Moore records a territory in which the ordinary flow of time-or the forward march of the assembly line-appears to have been thrown spectacularly into reverse. For Moore, who throughout his career has been drawn to all that contradicts or seems to threaten America's postwar self-image (his previous projects include portraits of Cuba and Soviet Russia), Detroit's decline affirms the carnivorousness of our earth, as it seeps into and overruns the buildings of a city that once epitomized humankind's supposed supremacy. In Detroit Disassembled, Moore locates both dignity and tragedy in the city's decline, among postapocalyptic landscapes of windowless grand hotels, vast barren factory floors, collapsing churches, offices carpeted in velvety moss and entire blocks reclaimed by prairie grass. Beyond their jawdropping content, Moore's photographs inevitably raise the uneasy question of the long-term future of a country in which such extreme degradation can exist unchecked.
ISBN: 8862081189
Publisher: Damiani/Akron Art Museum
Hardcover : 136 pages
Language: English
Dimensions: 14.3 x 11 x 0.8 inches