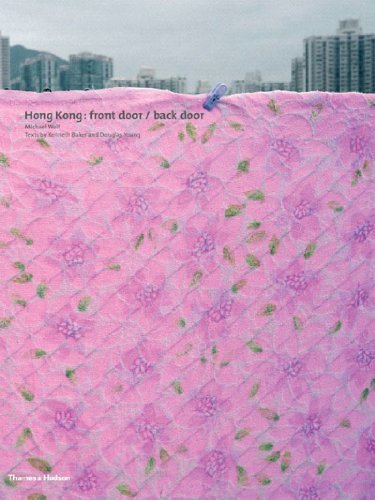 Hong Kong: Front Door/Back Door
by Michael Wolf
Publisher's Description
Surprising and at times shocking, this visual journey takes us through the narrow streets and broad cityscapes of one of the most heavily populated corners of the globe. Yet it is also an insight into a peculiarly unpopulated place, inhabited only by the traces of city dwellers.

The scale of Wolf’s vision alternates between the grand and the intimate, capturing both the striking facades of the buildings themselves and the minute human interventions that mark them.

Wolf’s photographs reflect a deft combination of Western aesthetic formalism and Eastern wabi-sabi. The accompanying texts by Kenneth Baker and Douglas Young explore the choices people make of lifestyle, forms, functions, identity and design, as well as the notion of Hong Kong as a brand.

Michael Wolf studied photography at the North Toronto Collegiate Institute, the University of California, Berkeley, and later at the University of Essen. A Hong Kong resident since 1995, he won a World Press Photo Award in 2005. Kenneth Baker has been the art critic for the San Francisco Chronicle since 1985. His writing has appeared frequently in periodicals including Artforum, Art in America, ArtNews and The Art Newspaper. Douglas Young was born in Hong Kong and trained as an architect in the UK. After briefly practising the profession, he went on to co-found the successful Hong Kong lifestyle brand G.O.D. (Goods of Desire) Ltd.
ISBN: 0500543046
Publisher: Thames & Hudson
Hardcover : 120 pages
Language: English
Dimensions: 10.7 x 14.1 x 0.8 inches