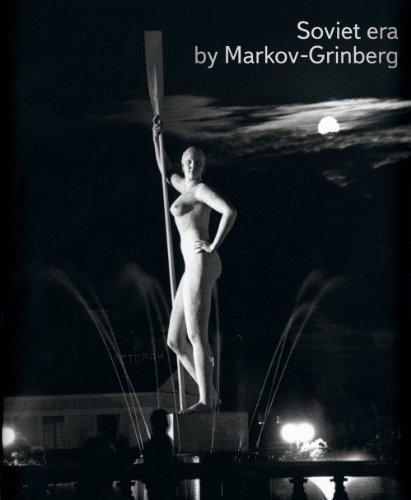 Markov-Grinberg: Soviet Era
by Mark Markov-Grinberg
Publisher's Description
Mark Markov-Grinberg (1907–2006) is one of the Soviet era’s greatest photographers, ranking alongside Alexander Rodchenko and Gustav Klutsis in his energetic portrayals of an optimistic, rapidly changing country as it segwayed into the Stalin years. Markov-Grinberg learned photo-reportage in the mid-1920s, while working at the newspaper Sovyetski Yug (Soviet South). In the early 1930s he moved to Moscow to become a correspondent for the Soyuzfoto Agency. Today he is perhaps best known for his photographs of red stars replacing double-headed eagles on the Kremlin towers, or his portraits of Nikita Izotov (from the Coal and Roses series), Yuri Gagarin, Maxim Gorky, David Oistrakh, Ilya Ehrenburg and Sergei Eisenstein—photographs that helped to define the culture of the U.S.S.R. in the 1930s, and all of which are included here. Often juxtaposing the march of industrialization with rural scenes, this volume reproduces those iconic images of those heady times alongside numerous previously unseen pictures, recording a pivotal and dramatic half-century of Russian history.
ISBN: 8862082274
Publisher: Damiani
Hardcover : 160 pages
Language: English
Dimensions: 9.3 x 11.1 x 0.8 inches