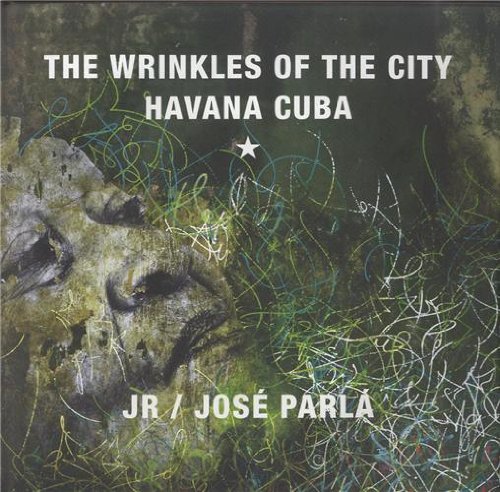 JR & José Parlá: Wrinkles of the City, Havana, Cuba
by Clara Astiasarán
Publisher's Description
Since 2004, the French artist JR has traveled the world flyposting colossal black-and-white portraits of ordinary citizens on the walls of city buildings. His most recent project, The Wrinkles of the City, began in Cartagena, Spain, where he photographed the city’s oldest inhabitants, imagining their wrinkles as metaphors of urban texture and history. He has subsequently reprised the project in Shanghai, China and Los Angeles. In may 2012, JR collaborates with American artist Jose Parla on the latest iteration of The Wrinkles of the City: a huge mural installation in Havana, undertaken for the Havana Biennale, for which JR and Parla photographed and recorded 25 senior citizens who had lived through the Cuban revolution, creating portraits which Parla, who is of Cuban descent, interlaced with palimpsestic calligraphic writings and paintings. Parla's markings echo the distressed surfaces of the walls he inscribes, and offer commentary on the lives of Cuba’s elders; together, JR and Parla's murals marvelously animate a city whose walls are otherwise adorned only by images of its leaders. This volume features the portraits, short biographies of their subjects and photographs of their mural collaborations painted around Havana. a film documenting the project appears in 2013. Based in Paris, JR exhibits freely in public sites in the cities around world. His projects include Portraits of a Generation (2004– 2006), Face2Face (2007) and Women Are Heroes (2008). In 2011 he was awarded the Ted prize.
ISBN: 8862082509
Publisher: Damiani/Standard Press
Hardcover : 160 pages
Language: English
Dimensions: 0.9 x 12 x 12.1 inches