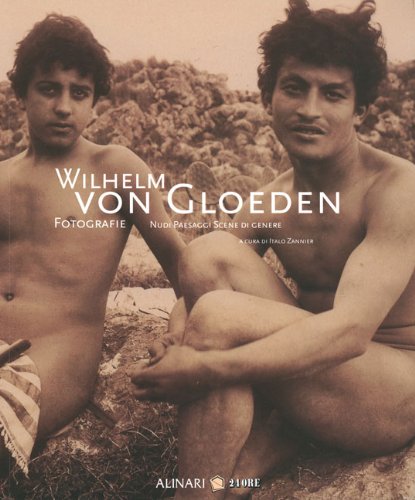 Wilhelm von Gloeden: Photography
by Italo Zannier
Publisher's Description
At the end of the 19th century a group of photographers, so exceptional as to form a singular elite coterie, were at work in Eastern Sicily, between Messina and Siracusa. Capuana, “professor of photography” was the president and there were at least two members, De Roberto and Giovanni Verga, all passionately devoted to taking photographs along the Alcantara River and the photogenic, sun-filled countryside, apt subjects for ‘verist’ portraits of rocks, olive trees and peasants. Another member might have been the handsome young German Wilhelm von Gloeden, immigrant privateer of pictures, eventually resident photographer among the rocks of Taormina, above the reefs of Naxos, his gaze fixed on smoking Etna. Mongibello, Mount Etna, seen as Olympus, surrounded by the dramatic phantoms of the myths of Arcadia, with backstage, naked boys from dawn to sunset. Adorned and perhaps amused, they were ready and willing to take part in the scenic rite contrived by the exotic and genial Wilhelm, stage director of an archaeological dream his nostalgic photographs made seem still real or at least possible.

The young Wilhelm von Gloeden (barely twenty-two) arrived in Taormina in 1878 after pausing in Naples. He immediately became involved in photography, apparently also for economic reasons, but above all because this new medium fascinated him (his prophetic stepfather had given him a camera!). He had a “tourist” desire to capture in images the mythical landscape he saw from the terrace of the house, first towards Vesuvius and then towards Etna; the volcanoes on one side and the sea on the other. And the Sun of the South, which photography insisted on.
ISBN: 8863020043
Publisher: Alinari 24 Ore
Paperback : 192 pages
Language: English
Dimensions: 9.4 x 11.3 x 0 inches