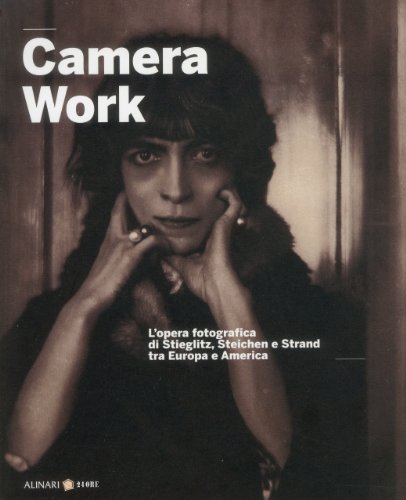 Camera Work: The Photographic Work of Stieglitz, Steichen and Strand between Europe and America
by Pamela Roberts
Publisher's Description
The first issue of Stieglitz’s famous photographic magazine is reissued at a time of heightened appreciation of photography as art form. Digital photography has opened the photographic art form to a much wider group of enthusiasts, at the same time as interest in the incomparable work of Stieglitz, Steichen and Strand has reached new peaks. Their photographs now sell at auction for ever-increasing amounts, rivaling some paintings as recognition of their art form continues to grow. Alfred Stieglitz (1864-1946) opened his brief editorial in the first issue of Camera Work, published in January of 1903,. with the following unpretentious words: 'The Time appearing ripe for the publication of an independent American photographic magazine devoted largely to the interests of pictorial photography, 'Camera Work' makes its appearance as the logical outcome of the evolution of the photographic art. It is proposed to issue quarterly an illustrated publication which will appeal to the ever-increasing ranks of those who have faith in photography as a medium of individual expression, and, in addition, to make converts of many at present ignorant of its possibilities.' Frequently described as one of the most beautiful and influential publications in American art, Camera Work, which ran to 50 numbers between 1903-1917, is Stieglitz’s visual and written love poem to photography. The reissue of this first volume will be an important publication, much in demand by the growing numbers of fans of the art.
ISBN: 8863020280
Publisher: Alinari 24 Ore
Paperback : 144 pages
Language: English
Dimensions: 9.5 x 11.5 x 0 inches