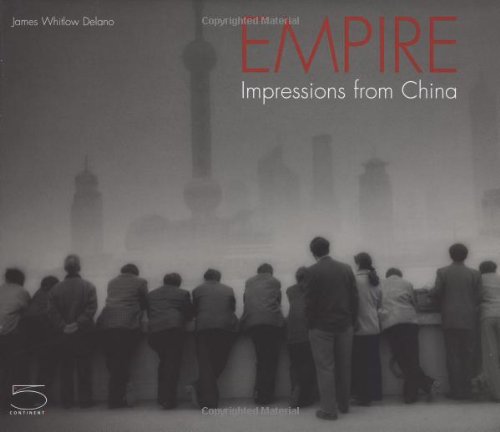 Both timeless and epic, American photographer James Whitlow Delano's photographs of China evoke the shadowy spirit of this vast land and ancient culture, and its rapidly, dramatically changing face. His images probe the inner layers of China and its people in fleeting facial expressions and gestures, and in fragments of architecture, preserving the details that define and differentiate China.

As China undergoes rapid, prolific change, Delano captures the everpresent tension inherent in the struggle and striving of a nation and its people, and the luminous beauty and strength of the human spirit and the ability to overcome adversity. The lifeblood of Delano's deeply moving vision of China is his ability to capture that tension and to reveal the myriad innate and mysterious details that make China and its people unique.

His images, taken over the last seven years, express his admiration for the hardworking, tenacious people while revealing his mixed feelings about the ineluctable 'muting of the ancient rhythms' as China moves toward sweeping westernization.

James Whitlow Delano's on-going photography project, 'Imagining Asia,' has taken him from the rainforests of Southeast Asia to the ancient Silk Road in China's far west. His photographs have appeared in Outside, Travel & Leisure, Time, Interview, Harper's, Geographical, Blind Spot, and Zoom. He received the Award of Excellence from Communication Arts in 1998 and in 2000, and the 2000 Alfred Eisenstaedt Award. His work was chosen for the Photo District News Photo Annual 2001 and for the jury-selected annual American Photography in 1999 and 2000. His photography has been exhibited in the United States and abroad in solo and group exhibitions.
ISBN: 8874391277
Publisher: 5Continents
Hardcover : 128 pages
Language: English
Dimensions: 11.3 x 9.8 x 0 inches