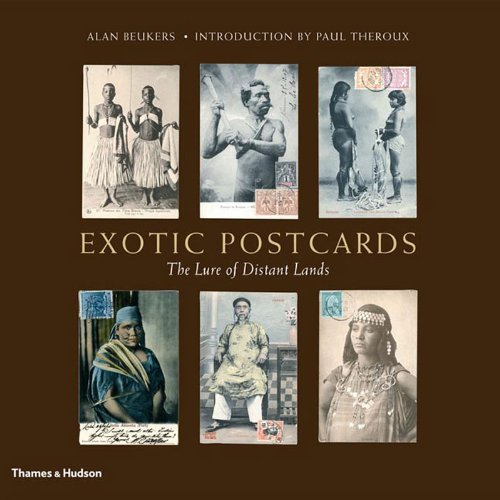 Exotic Postcards: The Lure of Distant Lands
by Paul Theroux
Publisher's Description
The antique postcards depicted here were acquired in the nineteenth and early twentieth centuries by Western tourists, business people, traders, and colonialists. The circumstances in which the cards were sent, and the details of those who sent them, are largely lost. Yet the audience for collecting them has enjoyed a spectacular growth in recent years and includes not only those with the collecting instinct or the desire to travel but also artists, photographic historians, fashion and jewelry specialists, and designers everywhere.

Once it was believed that by taking someone’s portrait you stole that person’s soul. Here, the human subjects have a powerful presence because they express a deep-seated connection with the land and customs that gave them their identities. Their stories are implicit in their eyes, their costumes, and their postures.

Reproduced with complete fidelity, these postcards take us on a magical journey across the world in five travelogues, depicting Asia, the Arab Lands, Africa, the Americas, and Oceania. The book is introduced by one of the greatest and most successful travel writers of our time.
ISBN: 0500543364
Publisher: Thames & Hudson
Hardcover : 208 pages
Language: English
Dimensions: 10.2 x 10 x 1 inches