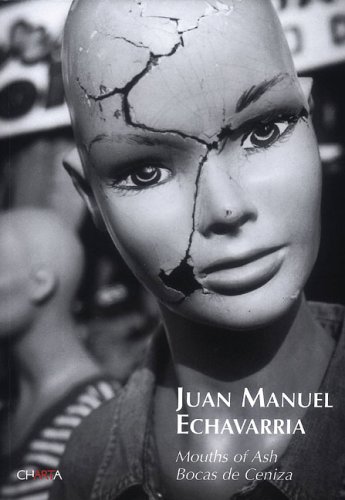 Juan Manuel Echavarría: Mouths of Ash
by Juan Manuel Echavarría
Publisher's Description
“I was drowning in words.”With that, Juan Manuel EchavarrÌa walked away from a 30 year career as a writer of fiction. A year later, he stumbled into his new vocation. Driving through Bogotá, he noticed that sidewalk vendors were displaying their wares on battered old mannequins. Shoppers rifling through the clothing weren’t paying attention, but for EchavarrÌa, for a moment, the mannequins became the roughed-up citizens of Colombia, rural peasants suffering massacre after massacre, displaced, made refugees, killed. These discarded and recycled stand-ins for the human body seemed to represent the damaged lives of ordinary people made helpless, homeless and violent by 50 years of civil war—the same refugees shopping in the market. Through photography and video, EchavarrÌa went on to create the visual requiem that’s documented here—the titular work, a 75-minute film, has been shown at The Museum of Modern Art, among other museums—a sad hymn to his own country, Colombia.
ISBN: 8881585634
Publisher: Charta/North Dakota Museum of Art
Paperback : 176 pages
Language: English